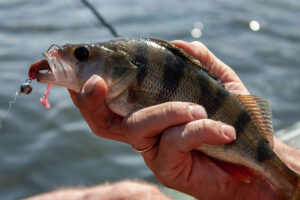 Au Gres Area boat anglers were catching some perch straight out from the river mouth and out in front of the hotel in 20 to 35 feet off minnows. Anglers were sorting through a lot of smaller fish but were managing to get nice catches. Bass anglers were catching some largemouth bass in the Au Gres River while casting spinners and body baits. Down south of Au Gres, near the Rifle, Saganning and Pinconning bars, perch anglers were also sorting through small fish to keep some in 15 to 20 feet of water off minnows.

Outer Saginaw Bay
Oscoda anglers were mostly catching lake trout, steelhead and walleye. Pier anglers were catching mostly bass and some Chinook salmon. Trolling spoons of various colors around 80 to 100 feet of water was the popular method when targeting salmon and trout. Off the pier, common methods for targeting bass, walleye and catfish were floating leeches and nightcrawlers, casting stick or body baits, and the use of drop shot rigs for catfish. While targeting salmon, pier anglers were casting spoons and body baits.

Anglers and boaters can do their part to help make sure Michigan’s rivers, lakes and streams are protected against invasive species by following these some simple steps:

Want to learn more about how you can help? Visit michigan.gov/Invasives