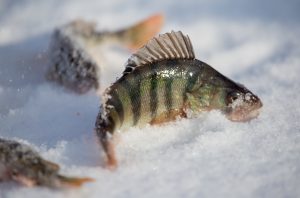 Saginaw Bay ice conditions still vary throughout. Those fishing off the county park in Pinconning caught a few perch with jigs and minnows in 5 feet. A couple pike were also caught. At Linwood, anglers were only getting out a short distance, and catch rates were minimal. Those walking off the state park were on questionable ice, and open water could be seen from the parking lot. Some are walking straight out; some are fishing near the Kawkawlin River or heading out to the first main pile of ice before the open water starts. The ice is not safe beyond this point. Fishing was very slow, with just a couple walleye or whitefish taken by those jigging a Swedish pimple tipped with a minnow. Anglers were out from Sebewaing to Bay Port; however, ice conditions vary. Overall fishing was slow, with only a few pike caught in the marinas or near shore. Some perch were caught out of Mud Creek, but most were small. A couple walleye and lake trout were caught, but the overall fishing was slow. Ice formed once again at the pier in Caseville, and a few anglers fishing off the parking lot caught a couple lake trout. Use caution as the winds have moved the ice in and out at Caseville all winter.

Saginaw River Had Ice. Boats could only get out in a few small areas at Zilwaukee and the Saginaw Marina at Rust Avenue, but they were breaking ice to do so. With all the ice, piloting a boat was somewhat difficult. A couple walleye were caught when they could find open water, but the overall action was slow.

Tittabawassee River Had ice, and the boat launches were not usable as there was a lot of shore ice.

Au Gres a few small bluegills, rock bass and crappie were caught at Eagle Bay when using minnows or wax worms. At Northport, those using tip-ups with minnows caught pike.

Tawas Area ice anglers were out about half a mile off the access road near Jerry’s Marina. Those fishing in 15 to 20 feet caught a couple walleye and lake trout on spoons and when jigging rapalas tipped with minnows.

Many anglers look forward to the opportunity to target trout – and not just on April 25 for the statewide opener! Trout fishing through the ice can be quite fun, if you use the proper techniques. Consider the following:

Certain species of trout, particularly brown trout, really gravitate to tip-ups as they linger in shallower water. Consider your depth if you do this type of fishing.

Lake trout and brown trout can be attracted easily by jigging with a spoon. For lake trout use a piece of smelt or sucker as your bait. For brown trout use the head of a minnow.

Don’t want to sit on the ice looking for trout? Then gear up for the open-water season! Check out lots of information about Michigan’s trout species online.