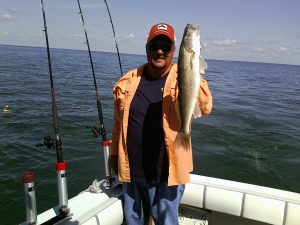 Saginaw Bay Pinconning Area walleye were caught in 25 feet. Walleye anglers can be found two miles east of the Spark Plug when trolling crawlers or crankbaits in 26 to 28 feet. A few yellow perch also were caught. At Smith Park in Essexville, shore anglers casting for bass caught very few. Walleye are starting to scatter along the east side. Anglers may have to do some searching and cover more water as fish were found in 12 to 32 feet. The Slot off Sunset Bay Marina and all the way up toward North Island is producing walleye, including some limit catches in 17 to 20 feet with a crawler harness or body baits. A couple walleye were caught between Caseville and Port Austin near Oak Beach. Crawler harnesses, flicker shads, spoons and Hot-n-Tots all have taken fish. Most are running artificial baits while increasing trolling speeds to avoid freshwater drum and catfish.

Au Gres Area had a lot of fishing pressure all the way down toward Eagle Bay Marina. Nearly every boat had some walleye, including a few limit catches taken in 30 to 40 feet with crawlers, plastics or spoons.

Outer Saginaw Bay
Oscoda anglers caught lake trout, steelhead, pink salmon and a few walleye, coho or Atlantic salmon when trolling spoons and spin-glo’s in 65 to 100 feet between the Au Sable River and Au Sable Point or out at the Humps in 150 to 180 feet. Lake trout were found in the bottom 15 feet, and walleye were found in the top 40 feet. Pier anglers caught freshwater drum, channel cats, rock bass, yellow perch, smallmouth bass and the occasional walleye with crawlers or minnows.

Fishing Tip: How to catch your own nightcrawlers

Are you interested in catching and keeping your own nightcrawlers? It’s fairly easy to do – just follow these simple steps:

Store them properly. When you catch nightcrawlers, just lay them on top of some storage bedding – don’t mix them in. This will allow you to remove sick or dead ones more easily.