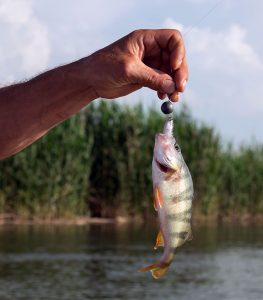 Saginaw Bay perch fishing reports were much better than they have been with buoys B, H and G all producing fish up off Linwood. Some anglers tried vertical jigging with spoons and caught a few walleye and big perch. A few trollers had decent walleye catches out of the weed beds along the Slot and inside Wildfowl Bay.

Au Gres Area of Saginaw Bay walleye trollers were fishing in 30 to 40 feet of water with some success, as well as going north to the vicinity of the Bell Buoy off Whitestone Point. Off Eagle Bay Marina, some walleye were taken in 15 to 20 feet of water on harnesses and some yellow perch were caught on minnows off the Saganing and Pinconning bars.

Oscoda lake trout were caught while trolling spoons, spin-glows and meat rigs near bottom or 50 to 70 feet down in 85 to 12 feet, or as far out as 140 feet. Steelhead and the odd Atlantic were taken on spoons 30 to 70 feet down. Walleye were caught on spoons while suspended over 60 to 120 feet. Pier anglers fishing late at night and early in the morning had a few channel catfish catches while still fishing stink baits or night crawlers. Freshwater drum, smallmouth bass and rock bass were also caught.

Tawas Area walleye anglers fishing around the weed beds up in the “armpit” of Tawas Bay took a few walleye near buoys 4 and 6. Those targeting perch found a few small ones but nothing big enough to keep. Outside of the bay trollers caught walleye on harnesses beyond buoy 2 and down by the Bell Buoy in 35 to 50 feet of water. Some steelhead were taken from 70 feet around Tawas Point and up to Au Sable Point.

Salmon fishing on the Great Lakes is really hitting its stride as many species are getting ready to begin their upstream migration.

One tactic that can be particularly useful when targeting Chinook is fishing with glow lures. This species can often be caught near the surface in low-light conditions and glow lures make that opportunity even more appealing.

Are you interested in targeting Chinook salmon this later summer/early fall? Check out their page online.