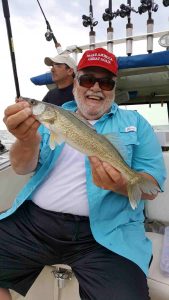 Saginaw Bay: Good walleye fishing was reported in 16 feet off Linwood, 12 to 15 feet off the Bay City State Park, the Old Dumping Grounds, three miles northeast of the Red Spark Plug (Buoys 11 & 12), seven to 12 feet on the Callahan Reef and just about anywhere in the Slot and up on the Bar between Quanicassee and Sand Point. Try a gold and black crank bait. Spinner colors did not matter as the fish were hitting just about anything but fire-tiger and chartreuse are always good. Limit catches were common all over the bay. Catfish were caught in the Hot Ponds. Shore anglers fishing the Quanicassee River caught freshwater drum, catfish and a few bass. Those casting in the Sebewaing River caught a couple pike.

Oscoda: Good catches of lake trout were found in 100 to 150 feet when trolling spoons and spin-glo’s near the bottom. Steelhead and pink salmon were found in the top 30 feet. Stomach contents show many of the steelhead were feeding on hatched and emerging insects. Anglers targeting walleye found a couple when still-fishing or drifting crawlers near the mouth of the river early or late. Channel catfish and freshwater drum were caught right off the bottom with crawlers and shrimp on a three way swivel or perch rigs.

Tawas Area: Boat anglers targeting walleye were getting fish on the northwest side of Big Charity Island in 10 to 45 feet. Trout and salmon anglers were taking steelhead and lake trout around Tawas Point in 70 to 75 feet. Pier fishing was summer-slow.

Many anglers love to fish with crankbaits (also known as plugs), a type of hard-bodied fishing lure. Below are some criteria to think about when selecting a crankbait.

Fat-bodied crankbaits that are shorter will displace more water and create more vibration. Many anglers prefer this type of crankbait when fishing in dark water or at night.

Thin-profile crankbaits glide through the water with minimal resistance. This option is great when fishing clear water and targeting species that are sight feeders.

Crankbaits can be a great lure option when targeting walleyes, bass or muskellunge (among other species). Consider trying one out during your next fishing trip!