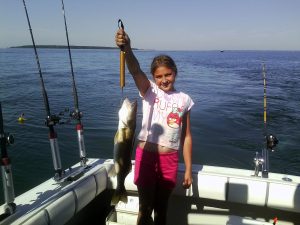 Saginaw Bay walleye were caught on crawlers near Buoys 1 & 2 at the Spark Plug in 23 feet. Fish were caught one mile east of the Spark Plug and near the Dumping Grounds in 17 feet. Those using crawlers off Finn Road did well. Good walleye fishing from Quanicassee to Sebewaing with limit catches taken. Fish were caught anywhere from 5 feet all the way out to the shipping channel. Depths change every day as the fish were scattered however 12 to 19 feet was the most consistent with a crawler harness or body bait. Good walleye action near Unionville and straight out from Sunset Marina in 15 feet or in the shipping channel in 26 feet with a crawler harness or flicker shad. Pink and purple were good colors. Fishing was slow up near Caseville.

Saginaw River was under a flood warning. Shore anglers at Smith Park in Essexville caught channel cats on worms.

Au Gres Area – Limit catches of walleye were taken with bottom bouncers in 30 to 45 feet from north of Point Lookout to Point Au Gres. At times, the fish were suspended up higher in the water column. A couple lake trout, steelhead, channel cat or perch were also taken.

Grindstone City shore anglers continue to catch smallmouth bass on leeches or crawlers. Catch rates were not consistent for those casting lures.

Au Sable River water temperatures were in the mid 60’s below Mio, Alcona, and Foote Dam. Walleye, suckers and rock bass were caught below Foote Dam when drifting or floating crawlers in the holes. Largemouth bass and yellow perch were found in the weedy cuts with crawlers or crank baits. A couple drop-back steelhead were caught in the holes when casting spoons. In the upper river between Alcona and Grayling, march browns, sulphur and blue winged olives should be effective fly patterns. Brown trout, steelhead and a couple brook trout were caught on small spinners between Mio and Alcona.

Port Austin walleye were caught west of the harbor with body baits in 25 to 35 feet.

Tawas Area Chinook and lake trout were found in 50 to 70 feet out past Tawas Point when trolling spoons. One large Chinook weighed over 11 pounds. Walleye anglers heading south towards Au Gres caught fish in 30 to 45 fish with a crawler harness. Lots of carp and smallmouth bass were caught by those fly fishing with crayfish imitations in three to four feet near Tawas Point.

Tawas River – casting tube baits and jigs off the dock and shore at Gateway Park caught smallmouth bass and pike.

Fishing Tip: What did you do for Free Fishing Weekend?

Did you enjoy the Summer Free Fishing Weekend this past Saturday and Sunday? Did you take someone out who had never fished before or hadn’t been out in a while? Keep it up!

Many people say a barrier to going fishing is knowing where to go and the skills needed. Help a novice angler gain the confidence to keep fishing by showing them how it’s done!

To plan your next trip, visit Michigan.gov/Fishing.