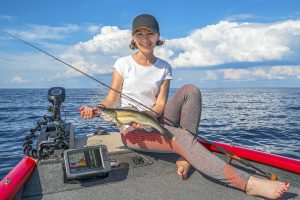 Saginaw Bay walleye were caught out near Buoys 1 & 2 in 30 feet, the Dumping Grounds in 16 to 18 feet and the Spark Plug in 20 to 23 feet when trolling crawlers. Fish were also caught south of the Black Hole in 20 feet with spoons and crank baits. Good walleye fishing along the east side of the bay in 16 to 19 feet from the bottom of the Slot all the way up to North Island. Fish were also found shallower in 12 to 14 feet or suspended off the bottom out deeper in the shipping channel. Anglers had to find them but did well once they did with a crawler harness, spoons or a variety of body baits. Color did not matter. Pike, channel cats, white bass, freshwater drum and a couple yellow perch were also caught. Slow fishing at Caseville with only a couple walleye caught.

Outer Saginaw Bay
Grindstone City lake trout and a couple pink salmon were caught with spoons and lead core in 90 to 120 feet.

Port Austin did not have much boat activity. Smallmouth bass were caught from the docks and breakwalls with lures or crawlers.

Tawas Area a few Chinook salmon, lake trout and steelhead were caught on spoons out past Tawas Point in 30 to 50 feet or more. Walleye anglers were heading to Au Gres, but a few fish were caught off Alabaster in 25 to 35 feet with crawlers and body baits. Pier fishing was slow with only a couple smallmouth taken on tube jigs or body baits.

Fishing Tip: What to do when walleye fishing picks up
Courtesy of Tim Cwalinski, a DNR fisheries biologist out of Gaylord.

Walleye fishing is picking up steadily in the large inland lakes in northern Michigan. Some of these lakes include Burt, Mullett, Black, Long, Grand and Hubbard.

Many anglers who fish these lakes over the years are learning that by this time of the year, it is best to troll for walleye with lines that are elevated in the water column. Many think of walleye as a benthic, or bottom, species. While this is true at times, this species will come a long way up in the water column to hit your presentation. More so, they will often suspend in the water column based on forage.

If the mayfly hatch has begun on these lakes, expect to find these fish anywhere from five to 15 feet off the bottom, focusing your crankbaits or crawler harnesses in that region, instead of along the bottom. You might be surprised how well you can do.