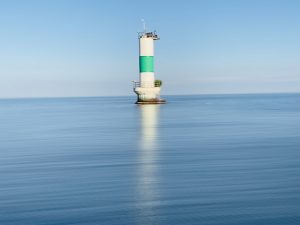 Fishing off Quanicassee was slow. The slot from Sunset to Sebewaing in 16 to 18 feet of water produced some walleye. Walleye were also being caught east of the shipping channel in 26 to 28 feet of water at the end of Sand Point and off Oak Point. Crawler harnesses, flicker shads and spoons all caught walleye.

Au Gres Area boat anglers caught good numbers of walleye in 14 to 30+ feet of water off crawlers and body baits. The fish were scattered from the Charity Islands all the way south to the catfish hole and Saganing bar. Pier anglers on the Au Gres River caught walleye, pike, largemouth and smallmouth bass and catfish off crawlers, body baits and spinners.

Au Sable River bass were the most common species being caught while casting stick and body baits. Catfish were caught with drop shot rigs with cut bait or worms. Anglers were occasionally catching walleye and freshwater drum most commonly by trolling crawler harnesses and body baits.

Port Austin walleye fishing was slow. Anglers reported marking a lot of fish on their electronics that would not bite. The walleye were scattered between 20 to 45 feet but some small schools were found in the same depths. There were some good catches but mostly just two to three fish per boat using both artificial lures and crawler harnesses.

Tawas Area boat anglers were catching walleye near the artificial reef in 15 to 20 feet of water with crawlers and body baits. Walleye and steelhead were caught in 30 to 70 feet of water out near buoy #2 and south towards the Charity Island, and everywhere in between. The fish were scattered, and anglers were spending a lot of time looking for active fish. Smallmouth bass anglers caught some closer to shore near the rock piles in 10 to 15 feet of water off jigs and body baits. Pier anglers caught small perch and rock bass off crawlers and minnows. Anglers at Gateway Park on the Tawas River caught smallmouth and largemouth bass, catfish, freshwater drum and bowfin off crawlers.

Sometimes we want to go fishing and enjoy getting out on the water, but just don’t want to expend a lot of energy – especially if it’s too hot to work hard at it. Here’s a laid-back way to cover water and find fish you might otherwise miss, without needing complicated gear or a fancy boat. All you need is basic fishing tackle and a watercraft. Even a rented rowboat, paddle boat or canoe can work.

Rig your rod with light line (4- to 8-pound test), tie a small hook on the end of the line (No. 4 or smaller), and add a split shot or two about a foot above the hook. Favorite baits for this method include half a nightcrawler or a baby crawler, leeches or even some of the heavily scented artificial leeches or small plastic worms. Hook the bait in the center of one end so it doesn’t spin when you gently pull it through the water.

Position your boat so the prevailing breeze will carry it along a drop-off or across any area with water depths of at least 12 to 20 feet. Let out enough line, or adjust the amount of weight on the line, so your bait will stay about 12 to 20 feet deep no matter how deep the water is. Then set your rod down against the side of the boat, relax and watch the tip of the rod for a bite. Drop the rod tip when you see a bite and count to three before reeling in and setting the hook with a firm pull. Not too hard!

Many fish, such as bass, walleye, yellow perch, crappie and larger bluegill, will move into deeper water and suspend at their preferred cooler temperature during the hot summer months. Slowly drifting a larger, natural bait at these deeper depths often will pan out.