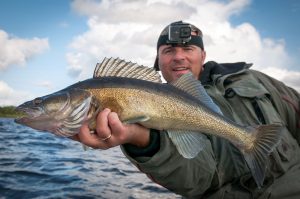 Saginaw Bay limit catches of walleye were taken with a bottom bouncer and crawler harness in eight to 12 feet near the Pinconning Bar. A few yellow perch, catfish, white bass or freshwater drum were also caught. Walleye were caught off the State Park, near the Dumping Grounds and the Spark Plug near Buoys 1 & 2 in 20 to 23 feet with a crawler harness or crank bait. Off Quanicassee, walleye were found in eight to 10 feet straight out or in the south end of the Slot. Catfish, carp, and longnose gar were found near shore and in the cuts and rivers. Walleye were caught in the Slot and all the way up to North Island in 10 to 14 feet. From Quanicassee to Caseville, largemouth bass and pike were hitting artificial baits near shore.

Au Gres Area limit catches of walleye were taken in 25 to 35 feet between Point Lookout and Point Au Gres or between the Rifle River and the Pinconning Bar. Some are using a bottom bouncer with a crawler harness while others are using a body bait. Perch, freshwater drum and white bass were also caught.

Port Austin had good catches of walleye west of the harbor when trolling crank baits in 12 to 20 feet.

Tawas Area lake trout, steelhead, and Chinook salmon were taken on spoons in 40 to 60 feet near Tawas Point. Walleye were caught on spoons or bottom bouncer with a crawler harness in 25 to 35 feet.

As a boater and/or angler you can do your part to help make sure Michigan’s rivers, lakes and streams are protected against invasive species. Below are some simple steps.

Want to learn more about how you can help? Visit Michigan.gov/Invasives.