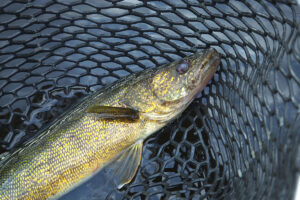 Saginaw Bay Anglers were starting to catch walleye with a crawler harness in 20 feet off Linwood and three miles northeast of Spoils Island when trolling a husky jerk. Yellow perch were also found northeast of Spoils Island in 20 feet. A couple boats fishing from Sebewaing to Wildfowl Bay caught walleye in shallow water when trolling crawlers and artificial baits. At Sebewaing, crappie were caught in the river with minnows and artificial baits. At Bay Port, large and smallmouth bass were caught and released when casting artificial baits in 2 to 10 feet around North Island and Heisterman Island. Crappie were caught in the canals around Sand Point.

Saginaw River Yellow perch were caught near Smith Park in Essexville. The fish were 7-9 inches.

Au Gres Area Walleye were caught in 15 to 25 feet off Whitestone Point, however no big numbers were reported.

Tawas River Perch, smallmouth bass and bullhead were caught at Gateway Park when still-fishing with minnows or casting body baits. Perch anglers were sorting through a lot of small ones to get a few keepers.

Fishing Tip:
Ever wonder where to fish in a new area? Hear from DNR staff on what to expect this spring by watching our Spring Fishing Forecast videos.