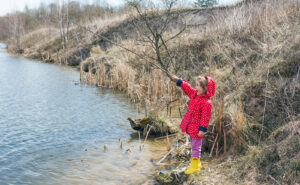 Saginaw Bay there is not much to report as the ice is gone and boat anglers were not able to get out because of strong winds. The cuts and canals are ice free. Shore anglers caught a few yellow perch off Garner Road and Finn Road when using perch rigs with minnows. Only small perch were caught in the cuts. The pier at Caseville has open water and anglers are starting to look for lake trout. Walleye and pike season are closed on the inland waters off Saginaw Bay.

Au Gres Area the docks are in at the DNR launch. A couple boats went out of the Pine River but the skid pier in not in yet. It was too windy and no fish were caught.

Outer Saginaw Bay
Tawas Area strong winds have blown the ice offshore. The docks are in at the DNR launch. Fishing was slow. A steelhead was caught in 6 to 8 feet when using a body bait and a couple walleye were taken in 30 to 32 feet in front of the Tawas River. Several anglers were casting spoons off the pier. The skid pier at the State Boating Access Site is not in yet.

Fishing Tip:
Use a non-slip loop knot to tie on streamers while fly fishing. It lets the fly move in a greater range of motion and can sometimes trigger more strikes from fish.