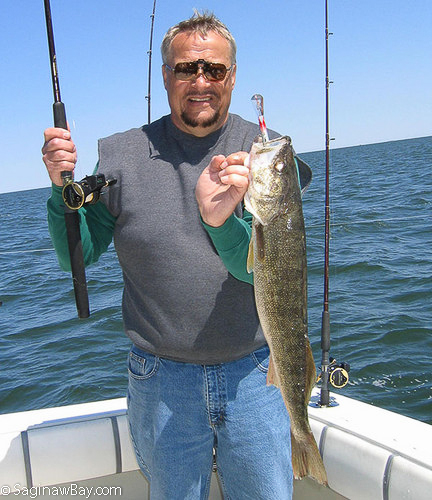 Saginaw Bay Walleye were caught at the Old River Channel, the Dumping Grounds and at Buoy 3 northeast of the number one buoy. Walleye fishing was good on the east side of the bay. The slot out from Sunset and up to Sebewaing was producing in 15 to 18 feet of water. Shallower water of 10 to 12 feet was also good for walleye. Around Caseville, anglers caught a few walleye out front and toward Sand Point, and also off Oak Point. Crawler harnesses and body baits were working well. Walleye were also caught at Finn Road out in 20 feet of water. Crawler harnesses were working the best. Smallmouth and largemouth bass were caught in the lower part of the Saginaw River on an assortment of crankbaits and rubber worms.

Au Gres Area Catfish, bullheads and freshwater drum were caught in the Au Gres River while still fishing crawlers on the bottom. Walleye fishing was good, with some limits caught while trolling crawlers and crankbaits in 15 to 35 feet from the mouth of the Au Gres River and south toward the Saganing bar. Some largemouth and smallmouth bass were caught and released near the Charity Islands and near the shoreline while casting spinners and plastics.

Tawas Area Walleye were caught near buoys #4 and #6 while trolling crawlers in 15 to 17 feet of water. Some chinook salmon, Atlantic salmon, lake trout and walleye were caught out past buoy #2 while trolling spoons and body baits in 50 to 70 feet. There were some smallmouth bass caught and released near shore along and out near Tawas Point while casting spinners and plastics. At Gateway Park on the Tawas River, fishing was slow. There were some smallmouth bass caught while casting spinners, body baits and crawlers.