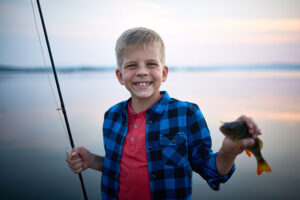 Sebewaing a few largemouth bass were caught on night crawlers in the marina.

Geiger Road Area Anglers had good perch fishing with 15 to 20 per angler on average. They were catching fish straight out in 6 feet of water. Anglers were catching good numbers of largemouth bass and northern pike while casting various artificial baits in the weeds in three feet of water. Some bluegills were caught around Shook Island in eight feet of water.

Outer Saginaw Bay
Oscoda Pier anglers fishing out on Lake Huron caught a few coho and steelhead. Pike and bass were also caught off the pier. Most commonly, anglers were either casting spinners, spoons and body baits. Common colors that were seeing success were hot pink, orange and glow lures at night.

Au Sable River fishing picked up with Chinook and coho in the river with a few steelhead and Atlantics as well. Various methods were seeing success. Most commonly was the use of casting spoons and spinners. With success being seen drifting spawn as well. Common colors used were hot pink, orange and bright yellow.

Tawas Area Chinook were caught in the Tawas River at Gateway Park while casting spoons and body baits. There were a few small perch and rock bass caught in the Harbor off of perch rigs with minnows.

Looking for a new place to fish? Check out our Where to Fish page to find a new fishing spot.