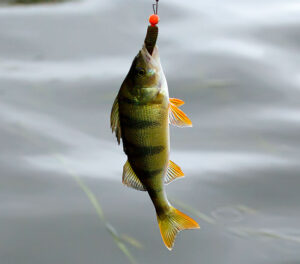 Saginaw Bay Yellow perch were caught in 15 feet of water at Linwood, Gambill’s Landing and the Old Shipping Channel. Fish were also caught at Spoils Island in 14 to 16 feet of water. Off Quanicassee, a few perch were caught around 8 to 10 feet of water on perch rigs with minnows. Fishing around the Sebwaing area was slow with only a few perch being caught with most being small. Some northern pike and largemouth bass were caught near shore on a variety of artificial baits. With waters cooling down on Saginaw Bay, yellow perch could be found around weed beds in 10 feet of water or less on the east side of the bay. Anglers may need to bounce from spot to spot to find fish.

Au Gres Area Perch fishing was hit or miss. Boat anglers were catching perch out near Pt. Au Gres in 15 to 25 feet of water off minnows.

Tawas Bay Area Boat anglers were catching a few walleye inside the bay in 15 to 22 feet of water while using body baits. Some perch were caught in the bay up near Jerry’s Marina and at the Yacht Club off crawlers or minnows. Dock anglers were catching some catfish in the Tawas River at Gateway Park off crawlers or shrimp. There were a few walleye and Chinook salmon caught while casting body baits.

Fall is a great time to target smallmouth bass with Great Lakes pier fishing, a tactic underutilized by many anglers. As the lakes and rivers cool, minnows will congregate around the piers. Large, educated river smallmouth migrating downstream in the fall often will drop their guard when gorging on minnows at the river mouth, allowing some very nice fish to be taken on minnows that otherwise would be very slow to bite.