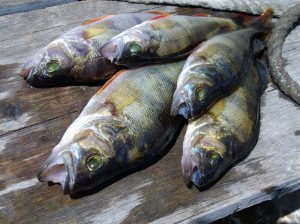 Saginaw Bay Off Linwood, yellow perch fishing started to pick up out near Sailboat Buoy B. Average was 9 to 11 inches. Walleye are starting to head out deeper past buoys 1 and 2 in 30 feet or so. Catch rates in the inner bay were starting to slow. Windy conditions limited activity on the east side. Quanicassee to Sebewaing was slow overall, with only a few walleye caught in the Slot in 15 to 18 feet, along the edge of the Coryeon Reef or between Sand Point and Caseville in 20 to 30 feet and Oak Point in 30 to 40 feet. Catch rates were not consistent, and anglers had to cover a lot of water to find fish. Most were using a crawler harness, flicker shad or spoons. Switch up baits and change trolling speeds if needed.

Outer Saginaw Bay
Grindstone City Lake trout were found in 100 to 130 feet northwest of the harbor. Walleye were scattered in 15 to 30 feet. Artificial and live crawlers worked best.

Oscoda producing lake trout, pink salmon, steelhead, walleye and the occasional coho when trolling spoons and spin-glo’s in the top 70 of waters 80 to 140 feet deep. There have been plenty of pink salmon to be found. A few walleye were found in shallower water. Hot colors were blue, chrome, yellow, orange and purple. Pier anglers caught rock bass, smallmouth bass and freshwater drum when floating crawlers.

Port Austin area a few walleye were caught, but they are scattered in 20 to 40 feet around the lighthouse and to the west toward Caseville. Those trolling in 90 to 110 feet picked up a couple lake trout, steelhead and coho, but the action was slow.

Tawas Area Walleye were caught straight out from the Tawas River in 30 to 70 feet with a crawler or body bait and inside the bay near the weed beds in 15 to 25 feet with a lindy rig and crawlers. There was a large mayfly hatch with the warm muggy weather, which may have slowed the bite. Steelhead, lake trout and pink salmon were caught out towards Au Sable Point in 80 to 100 feet with spoons and dipsy divers.