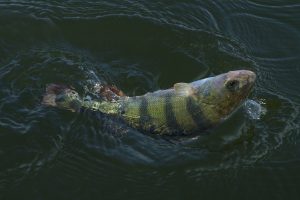 Saginaw Bay perch were caught on minnows in 17 feet at the Pinconning Bar. Some were 10-12 inches, but anglers were fishing all day to get 20-30 fish. From Quanicassee to Fish Point most anglers were shore fishing because of the wind and rain. The water was stirred up with a lot of weeds. A few more fish were being caught including northern pike, largemouth bass, panfish and the occasional walleye or yellow perch. No big numbers but the variety of fish is improving. Sebewaing to Caseville had little activity. A couple bass were caught near shore.

Au Gres Area walleye were caught when trolling crawler harnesses and flicker shads out near the Charity Islands. Those trolling all day were getting 6-7 fish. Walleye were also caught between Pt. Au Gres and Pt. Lookout in 32 to 33 feet, but anglers were working hard to get a few fish. Some perch were caught out from Eagle Bay Marina.

Outer Saginaw Bay:
Oscoda anglers trolling spoons and spin-glo’s in 50 to 150 feet caught lake trout, walleye and a couple Atlantic salmon, but the bite was slow. Fish were also found both shallower and deeper and they were feeding on smelt and bloaters. Those trolling spoons and crank baits around the piers and the river mouth caught a couple walleye and the odd northern pike. Pier anglers casting body baits caught the occasional walleye in the morning or evening. Smallmouth were feeding on minnows at the mouth of the river. Those using minnows, crank baits and crawlers did well.

Tawas Area smallmouth bass were caught in Tawas Bay and though no big numbers some nice fish were caught when casting spinners, crank baits and tube jigs near Jerry’s Marina and other areas in 4 to 10 feet. Pier fishing was slow.

Walleye are thought to be in their best condition in the fall and can often be found in the river mouth areas of larger, inland lakes. They’re gathering there to take advantage of baitfish that like to hang out as the weather cools off. Set your sights on 10 to 12 feet deep to find these guys.

Perch will also populate around these same river-mouths, but these fish will likely be much closer to the river than walleye. Check out depths as shallow as 4 feet to find them.

Trout will be available in some of these larger lakes as well during this time period, and can be found in the same areas as the walleye and perch.

Try your luck at some great angling this fall. For more information on the numerous opportunities to fish this autumn, visit Michigan.gov/Fishing.