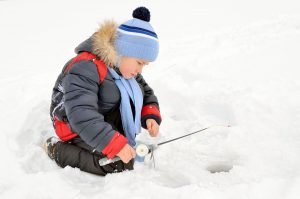 Saginaw Bay had a lot of anglers from Erickson Road south to Linwood, with Linwood being the most popular access point. Walleyes were taken in 17 to 20 feet in the vicinity of the second pressure crack. Anglers need to use extreme caution near both pressure cracks as they are still active and changing all the time. Both people and machines have fallen through the ice near them. Walleye were caught in 14 feet off Parish Road. Perch anglers were getting some fish in five feet off Anderson Road and six feet off Linwood. Good catches including a couple limits came from the shipping channel near Spoils Island. A few were fishing in 10 feet off the trailer park near the river mouth. East of the Saginaw River mouth, success was slow at Finn Road and at Vanderbilt Park. Perch anglers in the lower Quanicassee River caught a few small ones. Slow perch fishing from Sebewaing to Bay Port. A few pike were speared or caught on hook and line and several perch anglers reported seeing pike down the holes. Perch fishing was a little better off Mud Creek in Wildfowl Bay. A few pike and walleye were taken incidental to perch in Wildfowl Bay. At Caseville, the thaw last week made the river and marina pretty murky and fishing slowed to a standstill. No fishing at Port Austin as the few shanties inside the harbor were pulled to shore.

Are you a bass angler? A standard technique you use may be perfect for catching steelhead in the winter.

Some experts suggest choosing medium-diving crankbaits (popular colors would include variations of gold or chrome) and be sure to use braided line, which will aid in navigating obstacles under the water. Cast across the current and retrieve just fast enough to get the lure under the water but not so fast that it will snag the bottom. During the retrieve, let the lure swing downstream.

Another successful approach may be to take position directly upstream of a deep hole and cast straight downstream. Retrieve the lure directly through the hole. Again, make sure to retrieve the lure fast enough to get in under the water but slow enough to keep it from snagging up on the bottom. Many times an angler can perform an extra slow retrieve and let the current do most of the wok for them.

Steelhead are one of Michigan’s most popular sport fish, don’t miss your opportunity to target them this winter! For more information, visit the steelhead page on the Michigan Fish and How to Catch Them