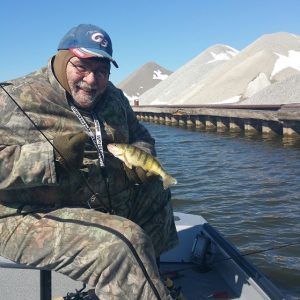 Saginaw Bay perch fishing is still not underway in the cuts and rivers around the bay as it is still early and the water in the bay is still cold with lots of floating ice. Perch were caught inside the basin at Eagle Bay Marina at the end of Sagatoo Road but anglers should bring a spud. Floating ice continues to hamper those trolling. Boat anglers were getting perch and walleye around Spoils Island and around the range light just lake-ward of the river mouth. A few six to eight inch perch were caught in the channel at Finn Road but most of the rivers and cuts may be iced over in the early mornings. The Thomas Cut and Allen Cut had a lot of fishing pressure but most of the fish caught were small. Fishing in the Sebewaing River and marina was slow with just a few perch and the odd crappie caught. The perch at Mud Creek were small. At Caseville, perch fishing was slow in the marinas and those casting hardware or still-fishing with minnows caught a few lake trout or the odd brown trout, steelhead, whitefish or burbot. No reports yet on the sucker runs but they should start soon.

Saginaw River anglers are reminded that the river is considered inland water and walleye season along the entire river closed on March 15 and does not re-open until Saturday, April 28. Boat anglers fishing for perch in the lower river did well with eight to 10 inch fish taken on perch rigs and minnows. Shore anglers near the cement plant in Essexville caught a few. Be sure to check the Exceptions to General Regulations by County in the Fishing Guide for seasonal gear restrictions for the river and its tributaries.

Au Gres Area walleye were staging just off the river mouth and those trolling were doing well including some that were taking limit catches.

Au Gres River those fishing down at the Singing Bridge (Whitney Drain) caught some steelhead and one Atlantic salmon in the lower river and in the surf.

Pine River perch fishing in the lower river was slow and the fish were small.

Oscoda Area:  Au Sable River is running low and clear. Those using streamers in the lower river should find a small number of steelhead in the late morning or afternoons when it warms up.

Tawas Area pier anglers did catch some Atlantic salmon and lake trout with large minnows or when casting various lures. Boats trolling and vertical jigging down near Alabaster were getting both lake trout and walleye in 10 to 20 feet.

Tawas River shore anglers fishing downstream of US-23 did catch a couple steelhead and a few suckers.

Many anglers have their go-to spots for springtime fishing, but what about checking out the Detroit River?

According to many, in late March and early April the lower Detroit River is a great location to catch walleye in decent quantities. As April moves on fish move further upriver, but the opportunities are still bountiful.

As many are aware, several of Michigan’s Great Lakes waters have become world famous for walleye. The Lake Erie-Detroit River-Lake St. Clair-St. Clair River system is outstanding, drawing anglers from across the country in spring and early summer – will you be joining them?

For more information for fishing for walleye or any other species, visit DNR fishing page online.