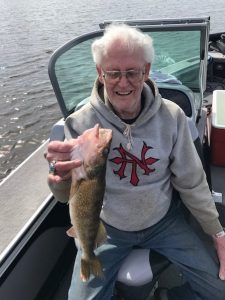 Saginaw Bay had excellent walleye fishing on crawler harnesses and body baits in four to seven feet off Gambil’s Marina near Pinconning. Off Linwood, those trolling did well around sailboat buoys A and B.  The lower part of the bay, from the Bay City State Park south to the Kawkawlin River mouth in 10 to 11 feet as well as the Saginaw River mouth and the old Dumping Grounds were all producing walleye.  At Quanicassee, walleye fishing was very good in six to 15 feet on body baits, crawler harnesses or spoons.  Some were taking limit catches.  Hot colors were pink, purple, chartreuse and brass.  Those launching at Sebewaing were heading south to fish the lower end of the Slot straight out of Quanicassee.  The carp are just starting to spawn so bow anglers should do well this coming weekend.

Au Gres Area #walleyefishing was very good between Point Lookout and White Stone Point when using a crawler harness or body bait. Those trolling off Eagle Bay Marina and the mouth of the Pine River did well on a crawler harness. Shore anglers casting off the end of the break-wall caught a couple walleye, pike and smallmouth bass. Shore anglers on the lower Pine River caught large-mouth bass, bowfin, and freshwater drum.

Oscoda those trolling body baits inside 25 feet caught some walleye but the bite has slowed. Morning and evening were best. Those trolling in 55 to 75 feet caught lake trout and a couple Atlantic salmon on spoons throughout the water column. Chrome, blue and orange were good colors. Pier anglers caught Atlantic salmon, lake trout, walleye, and a couple smallmouth bass or pike when still-fishing with minnows or casting jigs and body baits. Crawlers drifted under a float took walleye, suckers and freshwater drum.

Port Austin and Grindstone City fishing pressure was lighter at both ports but lake trout were caught in 70 to 90 feet. Surface water temperature on the outside of the Thumb was still pretty cold at 48 to 50 degrees. Pier anglers at Port Austin caught walleye when casting crank baits at night. Smallmouth bass were starting to show up in the harbors, Bird Creek and the lower Willow River.

Tawas Area those trolling in the bay and to the south took walleye in 15 to 25 feet. The better spots were around the artificial reef off Jerry’s Marina and south toward Alabaster, the Singing Bridge and White Stone Point. Boats going out near the Charity Islands were getting walleye on jigs with minnows. Fishing around the Tawas Harbor slowed with only a few walleye, pike and smallmouth taken. The walleye bite was best after dark. Trout and salmon were found in 30 to 40 feet southeast of Tawas Point when trolling spoons off downriggers.

Are you looking for a place to take the family fishing? Check out our designated Family Friendly Fishing Waters, present in all of Michigan’s 83 counties!

These locations have been confirmed by out fisheries biologists to have great amenities, be easy to access, and have a high likelihood of catching fish!

You can search for a location near you – or near your favorite Michigan destination – by visiting Michigan.gov/fishing.