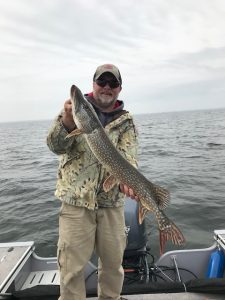 Saginaw Bay walleye were still being caught including limit catches straight out from Eagle Bay Marina in eight to 15 feet, off the Pinconning and Saganning Bars. Lots of limit catches from the B Buoy, Spark Plug, off Kawkawlin in seven to nine feet, Quanicassee and the Dumping Grounds. Try crawlers and crank baits. Purple, pink, and chartreuse were hot colors. Bass are hitting on spinners and topwater plugs.

Au Gres Area limits of walleye were taken straight out in 25 to 35 feet, towards the Steeples, Charity Islands and the humps south of Point Au Gres.  Smallmouth bass were caught on tube baits in the shallows.

Oscoda anglers trolling between Oscoda and Greenbush have found lake trout, pink salmon and even a couple Chinook when trolling spoons in 60 to 85 feet.  Some lake trout were as shallow as 30 feet.  Most fish were found throughout the water column and were full of smelt so if you find the smelt, you have a good chance of catching fish.  Orange, chartreuse, blue and chrome spoons were effective.  Pier anglers found walleye when casting jigs and body baits or floating crawlers.  A few Atlantics were caught around the piers when casting a small twister tail jig or still-fishing with inflated crawlers.  Channel cats and carp were caught when still-fishing with leeches and crawlers after dark.  Freshwater drum and a couple smallmouth bass were caught on jigs, body baits and crawlers.

Tawas Area boats are fishing in Tawas Bay near Buoys 4-6 or going to Alabaster and fishing 20 to 30 feet for walleye.  There were rumors of Chinooks salmon caught in 30 to 40 feet off the point.  Pier fishing was slow with a few smallmouth bass, pike or walleye taken at night.

Fishing Tip: Fishing for muskellunge is a premier challenge

Known as “the fish of 10,000 casts,” muskellunge are a tremendous game fish native to the lakes and streams of Michigan. They are a prized catch to many anglers, but present many challenges when trying to do so. But if you do your research and are patient – you too could possibly land a big one!

Muskie anglers can choose from a variety of methods such as trolling, casting or still fishing with live bait. Tackle requirements for muskellunge are stouter than equipment generally used for walleyes and bass. Larger, bulkier lures and fish that exceed 30 pounds or more call for heavier lines and stronger rods. It should be noted that muskie fishing success usually requires more dedication and persistence than for other species.

For more information on muskellunge in Michigan, visit Michigan.gov/muskie.