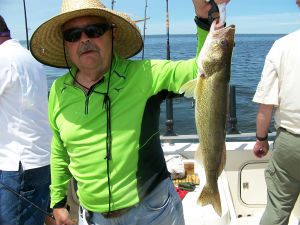 Saginaw Bay fair #walleyefishing action was reported straight out from Gambil’s in 23 feet, off Linwood in 15 to 20 feet, Finn Road in four to six feet, near the inner Spark Plug in 20 feet or north of Spoils Island in 16 feet. Spoons or a crawler harness worked best. At Quanicassee, shallow waters five to eight feet were better as the deeper water was too weedy. From Oakhurst to Fish Point, the inner edge had better fishing than the deeper side of the Slot. A crawler harness worked best but a few were using plastics. At Sebewaing, fish were taken in 12 to 15 feet. Port Austin had no reports.

Au Gres Area #walleyefishing anglers were fishing straight out in 30 to 40 feet and a few limit catches were reported near the Charity Islands and around the Steeples with a crawler harness in 20 to 30 feet. Perch, channel cats and freshwater drum were also caught.

Oscoda Area those trolling found decent numbers of lake trout with spoons, spin-glo’s and dodgers in the bottom 15 of 75 to 95 feet. Atlantic salmon were hitting on spoons and lead core in the top 25 feet. Pier anglers still-fishing with crawlers caught channel cats and a few walleye in the evening. Those casting jigs or crank baits caught smallmouth bass, rock bass and freshwater drum.

Tawas Area #walleyefishing was slow. There was activity off Jerry’s Marina and Buoys 4 and 6 but few fish were caught. Pier anglers casting or still-fishing with tube baits, spinners and body baits were targeting large and smallmouth bass, pike or catfish.

There are many benefits to eating fish, but anglers should be aware that some fish have mercury, dioxin, PCBs or other chemicals in them that can be bad for your health if you eat too many.

The Michigan Department of Health & Human Services’ Eat Safe Fish Guide helps you learn about eating safe, local and healthful fish from throughout the state. Their “3Cs” message is simple and easy to remember when it comes to eating safe fish:

Be informed and check out the Eat Safe Fish Guide to help protect yourself and your family from chemicals that could someday make you sick.

For more information, visit Michigan.gov/eatsafefish and then click on the “Going Fishing?” button.