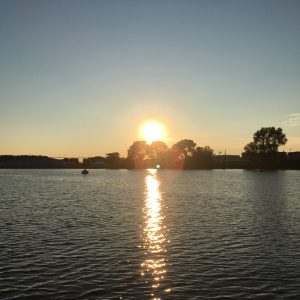 Saginaw Bay slow and steady, some perch and a few walleyes were taken in 10 to 15 feet off the Saganing and Pinconning Bars. Perch were caught from several locations including 16 feet of water off Linwood, the Crib, Sailboat Buoys G & H, and off the mouth of the Saginaw River. A fair number of fish ranged 10 to 12 inches. A couple walleye were caught incidental by perch anglers using minnows. Fishing along the east side of the bay was slow but a couple walleye were taken from the edge of the weed beds along the shallow side of the Slot and off the islands in eight to 12 feet.

Oscoda anglers found lake trout when trolling spoons and spin-glo’s in the bottom 30 of waters 60 to 140 feet deep out from the mouth of the river and around the drop-off. A few Atlantic, small Chinook and steelhead were taken on spoons below the temperature breaks with many fish marked 50 to 80 feet down. A couple Chinook were moving closer to the mouth of the river and in shallow waters 60 feet deep. Pier anglers caught channel cats, freshwater drum, rock bass, and smallmouth bass of all sizes when still-fishing with crawlers and leeches or casting crank baits.

Tawas Area still had a few walleye taken around the weed beds near Buoys 4 & 6 inside the bay. Those trolling out near Buoy #2 and beyond caught a couple walleye, steelhead, Atlantics and one Chinook.

Did you know there are typically two populations of bass in a water body? One that lingers near the shore to feed and one that hangs in deeper water and moves through structure to feed?

Both populations provide great opportunities for fishing, but many anglers overlook the bass in deeper water.

The next time you head to your favorite bass lake, consider fishing deeper water, particularly around larger weedbeds. Fish will often hang out in the weedbeds and move up through the depths to feed.

For more information on bass in Michigan, visit their page on the DNR’s website.