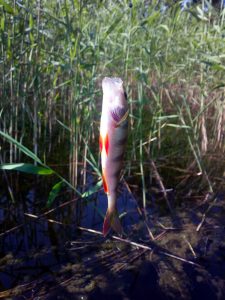 Saginaw Bay had few anglers off Eagle Bay Marina but a couple good catches of perch were taken in eight to 13 feet. Some perch were also taken from the old state bridge in Quanicassee. Those fishing the inner bay did well for bluegills with some nice fish caught by shore anglers at Finn Road in 11 feet and northeast of Sebewaing off Pop’s Place. Bluegills were also taken by shore anglers between Sebewaing and Bay Port. The bite was best when the sun came out. A couple bass boats at Bay Port caught a few largemouth bass close to shore. When the weather allows, anglers can find some good size smallmouth out near North Island.

Au Gres Area a few were out but one boat came in with about 20 decent size perch that were caught in 45 feet near the NOAA weather buoy.

Oscoda pier anglers were casting spoons and crank baits for salmon and trout. Atlantic salmon should be staging off the mouth of the river, but poor weather has not allowed anglers the opportunity to target them. Walleye were caught by pier anglers still-fishing with crawlers or casting crank baits in the morning and evening hours. Those using crawlers caught channel cats, smallmouth bass and freshwater drum.

Port Austin a few perch were caught from the docks.

Tawas Area a couple walleye were caught by boat anglers fishing off Tawas Point, and by those casting at the mouth of the river. Night anglers managed to get a couple off the pier but fishing inside the harbor was tough because it was packed full of minnows.

Although extremely important to Great Lakes commercial fishers, lake whitefish are becoming more and more popular with recreational anglers throughout Michigan. But you really have to know how to catch this delicious species!

The lake whitefish has a small, exceedingly delicate mouth and is confined to dining on insects, freshwater shrimp, small fish and fish eggs, and bottom organisms. Most feeding takes place on or near lake-bottoms. Keep that in mind when selecting your bait.