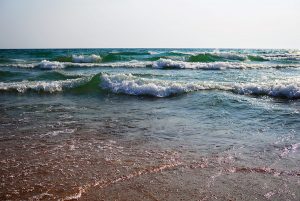 Saginaw Bay Area has had very little fishing pressure for perch. The wind has kept boat anglers on shore and the perch have not come into the cuts and river mouths yet. Colder and calmer weather might improve the perch fishing as the water cools down. Some perch were caught in six to eight feet off Quanicassee. A couple pike were taken on spoons or body baits in the Sebewaing Marina.

Saginaw River those fishing the lower river for walleye or perch had little success.

Outer Saginaw Bay
Oscoda anglers trolling spoons and spin glo’s around the pier heads and off Three Mile Park for trout and salmon had little luck. Those trolling body baits or jigging for walleye also had little luck. Fish were marked near the river however they did not want to bite. Pier anglers casting jigs and body baits caught a couple walleye and pike but the numbers were low. A small Atlantic salmon was caught when casting spoons off the pier. Those still-fishing with crawlers caught channel cats.

Au Sable River Atlantic salmon are preparing to spawn so many were unwilling to bite. Anglers caught a few by coaxing reactionary strikes with streamer flies, spoons, spinners, and small jigs or by targeting pre-spawn fish with spawn bags and beads. A few remaining Chinook were caught but the fish are very dark. A couple steelhead were caught on spoons, spawn and beads. The water temperature dropped to the low 50’s.

Port Austin a few walleye were caught off the break-wall at night with spoons and body baits. A couple seven to nine-inch perch were caught inside the harbor during the day.

Tawas Area some limit catches of walleye were taken at the mouth of the Tawas River and behind the State Police Post when casting body baits or jigs in the middle of the night. Pier anglers caught pike on live minnows or when casting various lures.

Fishing Tip: Why is fall fishing so great?

Many anglers will tell you that as fall rolls in the fishing gets better and better. But why is this?

There isn’t much formal research to answer that question, but several factors could be contributing to this influx of angling opportunities: forage availability, dropping water temperatures, fish movement, or oxygen availability.

Some say it could just be related to less fishing pressure and/or better angling techniques.

The bottom line is, if you don’t consider fall to be an ideal time to go fishing you may want to rethink that sentiment. Some of the biggest crappie, muskellunge, walleye and smallmouth bass can be found in the fall – don’t you want to experience that?

For more information on fishing in Michigan, visit Michigan.gov/fishing.