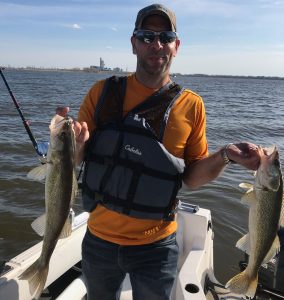 Saginaw Bay when they could get out, those trolling for walleye did well off Gambil’s Marina with a crawler harness or body bait in eight feet. Those launching from Pinconning Park were likewise fishing south toward Gambil’s. One boat got into some crappies in five feet off Gambil’s. From Linwood, walleye were found in 20 feet. Walleye anglers did fair in 10 to 12 feet from Quanicassee to the Callahan Reef and as far as Spoils Island and the shipping channel. Most got two to four fish per boat. Further north windy conditions made fishing much more difficult. Bass anglers did well in the Pinnebog River and Bird Creek. Shore anglers fishing the cuts and marina basins caught bass and pike.

Saginaw River windy weather had many boats fishing in the lower river where some limit catches were taken near the Coast Guard Station. Some were fishing around the U.S.S. Edson. The ramp at Finn Road is currently closed due to drain work being done.

Tittabawassee River walleye opener was good. The fishing was best very early in the morning with lots of fish caught including a good number of limits between Freeland and the mouth with jigs and minnows. Fishing up near the Dow Dam was not as good. The large females have left the river so most of the fish caught were smaller males. Near the confluence of the Shiawassee River, anglers caught a lot of white bass along with walleye. The walleye fishing should be good for another couple weeks.

Oscoda had good catches of lake trout were taken in 40 to 60 feet when trolling spoons and spin-glo’s. Pier anglers experienced a good walleye bite when casting body baits in the evening. Atlantic salmon as well as steelhead and a few lake trout were caught by pier anglers casting body baits or still-fishing with spawn. A few carp and freshwater drum were beginning to show up.

Tawas Area boats going south towards Au Gres and fishing off Alabaster, Whitestone Point and Point Lookout did well for walleye in 15 to 25 feet. Pier anglers could see large salmon or trout cruising around the piers but they would not bite.

Tawas River shore anglers in the lower river caught some walleye. Both large and smallmouth bass were caught and released immediately. Several anglers got a real workout when they hooked into some large carp that were moving up into the river.

Trout season officially opened this past weekend on Michigan’s inland waters and early season fishing can be quite good. Many anglers successfully swear by dead drifting worms this time of year due to the cold spring waters temperatures, but those heading out should not overlook spinners or small shallow diving crank baits either.

Worms are deadly in the early season, but lure fishing can also be very effective at bringing up big fish from their hiding spots under logs or under cut banks.

To learn more about fishing for trout in Michigan, check out these links highlighting the specific species.