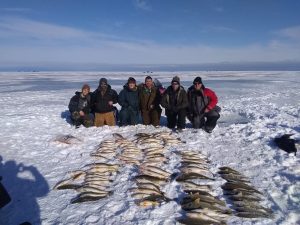 Saginaw Bay Anglers were @walleyefishing all over however caution still needs to be used and watch for the active pressure cracks along the west and south sides of the bay from north of Linwood to Quanicassee and ½ mile out from Finn Road. Those fishing off Coggins Road and up off the Pinconning Bar caught walleye. Limit catches were taken five to 10 miles out from Finn Road in 15 to 25 feet. Perch fishing picked up off Vanderbilt Park in 10 feet. The fish were 12-14 inches and some limit catches were reported. Be sure to watch out for the pressure crack near the Quanicassee River, head northeast toward Hidden Harbor instead. At Thomas Road, parking can be a problem because of too many trucks on the ice. The better fishing was 12 miles out with limit catches of walleye and big perch taken in 28 feet. Fishing pressure was light from Sebewaing to Caseville.

Saginaw River had lots of anglers out however watch the ice in the mid-channel because it was “iffy” in spots. Anglers are catching a lot of small walleye. A couple bigger ones were taken between Essexville and the mouth.

Some nice perch were caught in the evening at the mouth near the edge of the channel and the Yacht Club. Anglers can see walleye on the graphs and cameras, but they would not bite.

Many anglers look forward to the opportunity to target trout – and not just on April 27 for the statewide opener! Trout fishing through the ice can be quite fun, if you use the proper techniques. Consider the following….

Tip-Ups
Certain species of trout, particularly brown trout, really gravitate to tip-ups as they linger in shallower water. Consider your depth if you use this type of angling.

Jigging
Lake trout and brown trout can easily be attracted by jigging with a spoon. For lake trout use a piece of smelt or sucker as your bait. For brown trout use the head of a minnow.

Don’t want to sit on the ice looking for trout? Then gear up for the open water season! Check out lots of information about Michigan’s trout species online.