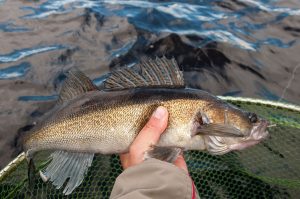 Saginaw Bay had little fishing activity. Walleye fishing off the mouth of the Saginaw River was good before the last snow storm. Those trolling around Whitestone Point, Point Lookout and Pointe Au Gres also did well for walleye with body baits in 10 to 20 feet. It appears the perch are just about done spawning. The few fish caught in the cuts last week were either ripe or already spawned out. Fewer perch were found in the cuts and river mouths this spring, but with the return of weed beds after the mussels cleared up the water, perch don’t have to run into the cuts to spawn.

Don’t forget that in Michigan you can catch-and-immediate-release bass all year long – and spring can be a great time to do so.

Bass can be caught with a wide range of artificial lures, as well as live bait.

There are numerous locations across the state that provide prime smallmouth and largemouth bass fishing. Get ready to head out this spring for some excellent bass fishing.

As a reminder, the possession seasons for bass don’t open for a bit (May 25 on all waters, including the Great Lakes and June 15 on Lake St. Clair, St. Clair and Detroit rivers).

Additional information on angling for this species can be found on their page at Michigan.gov/Fishing.