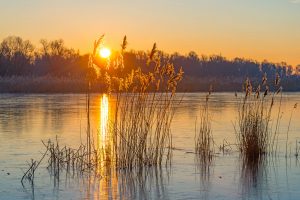 Saginaw Bay on the west side, there was a little ice fishing on shore ice in two feet of water or less at White’s Beach and in the small bay at Pinconning, but success was minimal. There were no anglers south of Pinconning. A few boats were fishing out from the Saginaw River, mainly around Spoils Island where they caught a couple walleye when trolling or vertical jigging with jigs tipped with minnows. Most were bringing in about three fish per trip. Not much going on up the east side from Fish Point to Bay Port. Ice conditions were pretty sketchy. A few were venturing out between Sebewaing and Bay Port, but they only caught a few bluegills, the odd crappie or pike.

Saginaw River action was slow. There were not a lot of boats out, and catches were dominated by undersize fish. The walleye action in Bay City and down to the mouth was also slow.

Tittabawassee River had more activity than the Saginaw River. The water was a bit high and fast, but fishable. At the Gordonville Road ramp near Midland, most boat anglers fishing up near the Dow Dam caught a couple walleye on jig heads with minnows. Average catch was one to three fish per boat per trip. From the Center Road launch in Saginaw Township, boat anglers going both upstream and downstream caught walleye on jig heads and minnows. White and chartreuse jig heads were the hot colors. The fish were found in 10 to 15 feet.

Tawas Area there was no fishable ice in Tawas Bay. On the state dock, a few anglers casting or walking the wall and dragging a crankbait caught a few walleye and lake trout in the late afternoon or early evening. One boat that went out from the Tawas River and fished down near Alabaster took nine walleye and one lake trout when trolling. A few perch were taken through the ice inside Eagle Bay Marina but not many. There was some ice fishing activity off Palmer Road, but ice conditions there were marginal at best and not much was caught.

Fishing Tip: Have you caught a Master Angler fish?

Did you catch an unusually large fish in 2018? It could qualify for our Master Angler program, which includes more than 50 species and recognizes large fish by anglers who practice catch-and-release or catch-and-keep.

Find the 2019 applications – and the full set of rules – online at Michigan.gov/masterangler.