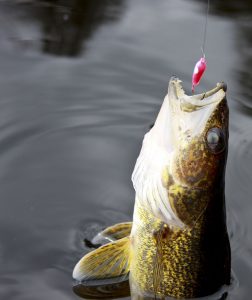 Saginaw Bay Area Walleye anglers off Linwood were marking fish but had no success catching them. A few walleye were caught off the north end of Spoils Island when jigging minnows in eight to 10 feet. Water levels near the river and the inner bay were high and muddy. A few catfish were caught at the Hot Ponds. Quanicassee to Sebewaing had poor fishing with only small fish taken. Those fishing the day use area on the Pinnebog River were taking suckers but heavy sinkers were needed due to the increased flow.

Oscoda: Pier anglers caught lake trout when drifting or still-fishing with spawn and minnows or when casting spoons.

Tawas Area: Pier anglers are catching brown trout, steelhead and smallmouth bass when still-fishing with minnows or casting lures. A few smaller perch were caught inside the pier. Those trolling were starting to catch walleye off Tawas Point, Alabaster and Whitestone Point. The fish were caught on body baits in 10 to 25 feet. Lake trout were caught near the reef.

Fishing Tip: Where to find smallmouth bass this spring

Although the catch-and-keep seasons don’t open until May or June (depending on location), the year-round catch-and-immediate-release season means you’re never without an opportunity to fish for smallmouth bass!

There are plenty of locations throughout Michigan that offer exceptional smallmouth bass fishing, but check out the list below if you’re interested in finding trophy-sized fish.

1. Lake St. Clair: cover lots of ground if you visit this water body and cast to the edges of weed patches.

2. Lake Erie: the shallow areas of this lake are good places to start, after the water warms up head to deeper water.

4. Grand Traverse Bays: Look for structure such as drop-offs, sand points, rocks or weed beds at this spot.

For more information on bass fishing regulations, check out the 2016-2017 Michigan Fishing Guide.