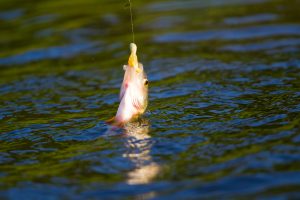 Saginaw Bay: Walleye fishing remains slow, possibly due to cold water temperatures and the stained water. Boat anglers fishing 16 to 18 feet off Linwood managed to catch a couple fish but still had trouble finding clear water. Stained water was still an issue off Spoils Island but anglers were still doing better here when fishing close to the rocks. Vertical jigging was better than trolling. Most are using a “blue ice” jig tipped with a minnow and fishing within three feet of the rocks. The Finn Road launch ramp was plugged with phragmites (wetland grass) and only usable by airboat at the moment. Boat anglers were practicing catch and release bass fishing off Sebewaing and Caseville. Walleye catches were slim to none. Shore anglers at Bay Port caught bullhead, small perch and small bass. Boats have just started launching from Port Austin, and have taken a couple of lake trout and walleye.

Au Gres Area: Had lots of fishing activity. Most boats were fishing around Whitestone Point, Point Lookout, and Pointe Au Gres but most only landed the average of one or two walleye. Those trolling right off the mouth of the Au Gres River caught a few walleyes and at least one steelhead.

Tawas Area: Boats trolling for walleye were heading south off Alabaster, off the mouth of Whitney Drain, and down as far as Whitestone Point. They have caught walleye and a few lake trout on body baits in 10 to 20 feet. Pier anglers caught carp, a few walleye, pike, a couple of Atlantics and brown trout as well as smallmouth bass.

Michigan’s general trout season opener will be here this weekend! Are you ready to hit the water for some great fishing this spring? Check out the list below for some potential places to visit.

Most everyone is familiar with the “Holy Waters” of the Au Sable, Manistee and Pigeon rivers, but the Sturgeon River also offers great fishing. For lakes, there are several in Montmorency County that are great to try.

The St. Joseph River proves to be a great destination, along with the Dowagiac Creek and River. Many tributaries to the Grand River also support populations of brown trout.

Try the lakes in Iron, Marquette, Alger, Luce and Schoolcraft counties or the Fox River system near Seney.