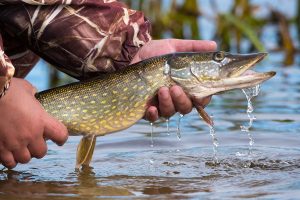 Saginaw Bay walleye anglers have switched from body baits to crawler harnesses and were fishing near the mouth of the Saginaw River when trolling in eight to 10 feet off Bay City State Park, 10 feet off the Kawkawlin River and five feet off the trailer park. Further out, fish were caught in 17 feet northeast of Spoils Island. Decent catches were taken in 15 feet along the Slot and the Callahan Reef northwest of Quanicassee. All fish were caught on a crawler harness when trolling very slow. Not many walleye were caught on the east side past Fish Point. Bass anglers did well in Wildfowl Bay.

Au Gres Area boat anglers did best trolling south past Point Au Gres in 20 to 30 feet. Those heading as far south as the Saganing and Pinconning bars found walleye in eight to 12 feet.

Oscoda Area very few anglers were able to get out due to high winds; however those who did were able to catch a couple walleye at the mouth of the Au Sable River. Pier anglers caught a few walleye and channel catfish when still fishing night crawlers or drifting them under a slip bobber.

Tawas Area boat anglers caught walleye past Tawas Point and down near Alabaster in 30 feet. Pier fishing was slow.

Fishing Tip: Fishing for muskellunge is a premier challenge
Known as “the fish of 10,000 casts,” muskellunge are a game fish native to the lakes and streams of Michigan. They are a prized catch to many anglers, but present many challenges when trying to do target them. But if you do your research and are patient – you too could possibly land a big one!

Muskie anglers can choose from a variety of methods such as trolling, casting or still fishing with live bait. Muskellunge tackle must withstand the larger, bulkier lures required, as well as the fact these fish can exceed 30 pounds. Anglers should use much heavier line and stronger rods. It should be noted that muskie fishing success usually requires more dedication and persistence than for other species.

Want to learn more about this valued game fish? Check out their section of the Michigan Fish and How to Catch Them website.