Saginaw Bay Bay City Area still has some pressure cracks around the Bay. Anglers will need to use caution and be sure to watch were they are going; especially in the dark. Walleye were caught off White’s Beach but watch the ice out there. The fish were caught just short of the pressure crack in eight to 10 feet. (Fishing Reports: Hot Bite)

Those fishing off Pinconning, Newman Road and Townline Road caught a few perch in the early morning and walleye after dark. Off Erickson Road, a few walleye were taken in the Black Hole but use caution out there. Walleye anglers found fish between one and one and a half miles off the Bay City State Park. Walleye were hitting off the mouth of the river along the Shipping Channel. Some went north eight to 10 miles off Finn Road and reported limit catches. Look for perch off Vanderbilt Park and up towards Tietz Drain. Fish very early morning before everyone else gets there. Walleye anglers heading three to four miles out from Sunset Bay and Thomas Road and fishing the middle of the Slot did well. Nothing at the Hot Ponds and if your ice fishing; stay clear of the channel. Perch fishing at Mud Creek and Geiger Road was spotty but a few nice catches were reported when it warmed up. Most fish were six to eight inches with a few up to 10. Walleye anglers fishing the Slot between Fish Point and the islands were heading out very late in the evening.

Saginaw River from Wickes Park downstream past the Zilwaukee Bridge was slow and spotty with lots of smaller fish caught for every keeper. Most are using silver and blue or fire-tiger jigging rapalas. During the warm spell, anglers did well in the area off M-13, Veteran’s Park and James Clements Airport. A few walleye were taken near the Appledore in Bay City but the action was slow from the Independence Bridge downstream to the mouth.

Tittabawassee River is currently not fish-able.

Au Gres Area most of the fishing activity was off Booth Road or Santiago Road. Anglers caught some walleye right along with the occasional lake trout or whitefish in 10 to 20 feet. Perch fishing was slow off Pine River and Palmer Road but the walleye anglers did well before the arrival of artic air.

Outer Saginaw Bay:
Tawas Area some perch were taken in 18 to 20 feet from Tawas Bay. Walleye fishing slowed but a few were taken in 20 to 22 feet. A couple lake trout were also caught.

Just a reminder this Saturday and Sunday brings the 2015 Winter Free Fishing Weekend to Michigan! 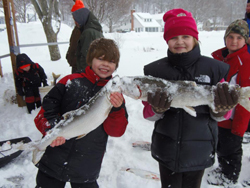 On those two days all fishing license fees will be waived. Residents and out-of-state visitors will be able to enjoy fishing on both inland and waters of the Great Lakes for all species of fish during their respective open seasons. Please note all other regulations still apply during that time.

There are plenty of ways to take advantage of the upcoming Free Fishing Weekend – whether that means heading out to your favorite fishing hole or taking your family to an organized event. Events are being held throughout Michigan, including in the counties of Arenac, Baraga, Bay, Chippewa, Emmet, Gogebic, Huron, Ingham, Iosco, Mackinac, Muskegon, Oakland, Otsego, Presque Isle, Roscommon, St. Clair, Van Buren, Washtenaw and Wexford.

Please note all events are subject to local weather conditions.

More information on the events mentioned above and on this weekend’s unique opportunity to fish for free can be found at michigan.gov/freefishing.