Saginaw Bay Area ice conditions continue to deteriorate so a good number of anglers are putting away their ice fishing gear and starting to get their boats ready. The die-hards were still going out and crossing active pressure cracks however extreme caution needs to be used! Watch for areas of open water. Shoreline ice is getting bad all around the bay. At Palmer Road, anglers crossing two major pressure cracks and fishing in 18 feet caught walleye. Closer to shore, fishing was spotty but a few were taken. Some perch were caught off White’s Beach.

Walleye were caught from the Bay City State Park south to the trailer park near the mouth in five feet. The bite was best from dawn until about 9:00 and in the evening after 7:00. Those wading and casting off the mouth of the Hot Ponds had no luck. A few crappie were caught in Sunset Bay Marina. North of Sebewaing at Rose Island and Geiger Road, perch fishing was spotty but a couple limit catches were reported. Most were six to eight inches with the occasional 12 inch fish.

Outer Saginaw Bay:
Tawas Area a lot of ice has blown out of the bay but there was still some near Jerry’s Marina and that is where ice anglers were concentrated. Yellow perch were caught but many were small and anglers were putting in considerable time. A few walleye were caught.

Weekly Fishing Tip: Finding big perch late in the season
If you’ve still got safe ice at your favorite fishing spot you may want to consider targeting yellow perch. Start at depths over 30 feet and focus your bait on what perch will likely be targeting: insect larvae. 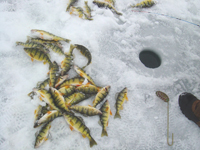 Being that deep, use lures the perch will be able to spot easily and select a presentation that encourages fish to chase the bait upwards. Please note you may need to switch holes frequently.

As the ice starts to melt and more oxygen is pushed into the lake you’ll start to see perch and panfish move into shallower depths.

For more information on fishing for yellow perch, check out their page online.