Saginaw Bay Walleye Fishing is slowing down but there are still bright spots. Some limit catches were taken in relatively shallow water on both sides of the bay so walleye fishing can still be productive but you may have to change where you fish. On the west side, a few were caught in 10 to 12 feet off Gambil’s Marina, 12 to 14 feet off the Pinconning Bar, near Buoy H and west of the Red Spark Plug (No. 12 channel buoy). Along the east side, walleye fishing was good in eight to 12 feet on either side of the Slot and along the Bar. Only a few limits were taken however most boats were bringing in enough fish to make the trip worthwhile. Crawler harnesses and crank baits worked best. Best spinner colors were orange, chartreuse and pink or purple and chrome crank baits. Try north of the Charity Islands, Oak Point and along the reefs between Caseville and Port Austin.

Au Gres Area trolling for walleye continue to do well south of Pointe Au Gres in eight to 12 feet, just west of the shipping channel in 25 to 35 feet and off the mouth of the Pine River and the Rifle River.

Oscoda had a mixed bag of Chinook and Atlantic salmon, lake trout, steelhead and walleye coming in. The fish were coming in closer to shore so start shallow and work your way out. Try 30 to 120 feet with downriggers, planer boards, lead core, copper and long lining. Spoons, body baits and cut bait seem to work well. Pier fishing picked up for walleye and catfish. Anglers have seen silver fish off the pier in the early morning.

Port Austin is still producing a few walleye but fishing has slowed. Those targeting lake trout took good numbers in 120 to 135 feet.

Tawas Area those trolling along the weed beds near Buoys 2, 4 & 6 caught a few walleye. Fair catches of perch were taken by those fishing the deep edge of the weed beds off Jerry’s Marina. Most of the fish were six to eight inches. Pier anglers caught smallmouth, rock bass and a few small perch. 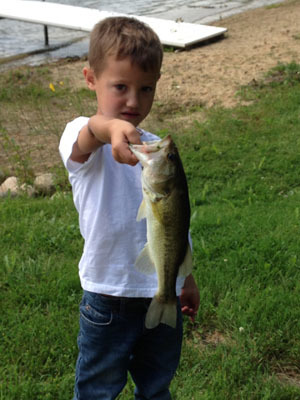 As Michigan’s inland lakes warm up in mid to late summer, knowledge of a water body’s temperature stratification becomes helpful for fishing. Seasonal temperature influences in lakes form different zones, and as a result, different temperature ranges and oxygen levels are associated with these layers. Knowledge of these layers or zones can lead to increased angling success.

The warm surface zone is called the epilimnion and has an abundance of oxygen. The bottom zone is called the hypolimnion and is typically cold and depleted of oxygen. The middle zone is the thermocline and the point at which warm oxygen rich top water is separated from the cold, oxygen depleted water below. The thermocline may prove to be a great depth at which to fish due to the abundance of oxygen and temperature found “in between” very warm and very cold. This ideal zone in most Michigan inland lakes typically will be between 10 to 30 feet, depending on lake size and depth. Just like us humans, fish need oxygen to breath and many don’t particularly like to be too warm or too cold.

If fishing in shallow water bodies, look for shaded areas provided by large floating vegetation, overhanging vegetation, submerged logs, or other woody debris which provides water that is a little cooler and cover, where many fish species prefer to spend their time. Also don’t forget to try fishing at night during the summer “doldrums” when water temperatures reach seasonal highs. Many fish species become active at night with relief from the daytime sun and heat. And lastly, take a kid fishing with you for luck, and to teach them about this wonderful sport!