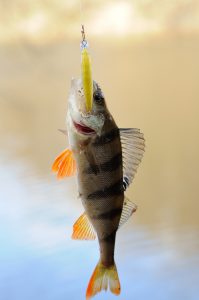 Saginaw Bay the area up toward Pinconning and Standish had fair fishing with perch hitting in 16 feet off the Pinconning Bar. Boat anglers were taking 20 to 25 fish per boat. Most were 8 to 10 inches but some did get the occasional 12 inch fish. A few walleye were taken off Gambil’s Marina near Pinconning in 14 feet and around the sailboat buoys A, B and H. Catfish were hitting worms and shrimp in the Hot Ponds. Over on the east side, most of the boats fishing out of Quanicassee have switched to perch along the south end of the Slot in 10 to 13 feet. Most were 6 ½ to 8 inches. Walleye fishing along the Slot was hit-or-miss but a few were taken in 10 to 12 feet between Sebewaing and Bay Port.

Au Gres Area had slow fishing with only a couple walleye taken off Pointe Au Gres in 35 feet. Down off Eagle Bay Marina which is at the end of Sagatoo Road, anglers were taking a decent number of walleye and perch in 15 feet. The walleye were hitting a crawler harness with pink, purple or silver spinners. The perch were not big but anglers were getting anywhere from 12 to 25 per boat.

Oscoda anglers found good numbers of lake trout when trolling in 120 to 160 feet. Most fish were found on the bottom but a few were suspended. Atlantic salmon and steelhead were in the top 30 to 70 feet. Chinook were 80 feet down in 130 to 150 feet. Walleye were suspended in 80 to 100 feet. Pier anglers caught some good size channel cats on crawlers or shrimp on the bottom. Freshwater drum and bass were taken on crawlers. A few walleye were caught when still-fishing or drifting crawlers.

Tawas Area a few walleye were taken off Alabaster in 50 feet. The odd walleye and steelhead were taken inside the bay when trolling in 80 feet. Pier fishing was slow.

Fishing Tip: Buying minnows for your next fishing trip

Minnows are a popular bait option for many anglers, but do you know the difference between the various species? Understanding these differences can help you excel during your next fishing adventure!

Fathead: These minnows are usually one to three inches long and are available all year long. In particular, fatheads are great for targeting yellow perch in the fall and are considered excellent walleye bait as well.

Golden Shiner: These minnows are usually around three inches long and are effective during winter, spring and fall months. Many anglers use these minnows for targeting walleye.

Sucker Minnow: These minnows are usually between three to four inches, but they can grow to nearly a foot long. They’re available at all times during the year and are considered a top bait choice for northern pike in the summer.

Please note Michigan has several bait restrictions in place to prevent the spread of fish diseases. Information about these restrictions and regulations can be found in the 2016-2017 Michigan Fishing Guide.