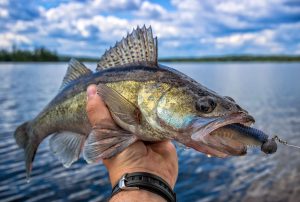 Saginaw Bay walleye were caught 2 to 3 miles northeast of the Pinconning Bar with spoons and harnesses. Perch were caught off the Pinconning Bar and off Gambills Marina in 14 to 16 feet but anglers were sorting out the small ones. Perch activity was slower near the sailboat buoys but the fish were bigger at 10 to 12 inches and the occasional fish at 14 inches. Those fishing the Hot Ponds caught catfish on worms and shrimp. Walleye were caught off Fish Point and along the edge of the Slot in 14 to 18 feet with body baits or a pink or purple crawler harness. Catch rates were spotty as the fish are scattered. Many switched to perch fishing. Try 9 to 11 feet off Quanicassee. Catch rates were decent but no limits reported. At Sebewaing, a few were fishing the Slot for walleye. Off Caseville, walleye were found in 25 feet near the Charity Islands.

Oscoda lake trout were found near the bottom in 120 to 170 feet. Steelhead were in the top 60 feet and Atlantic salmon were found both up high and near the bottom. Try meat rigs or spoons in green, chrome or pink. Walleye were suspended in 80 to 110 feet. A good number of fish were marked near the mouth of the river but they would not bite. Pier anglers caught a couple walleye, smallmouth bass, channel cats and freshwater drum when drifting or still-fishing with crawlers.

Tawas Area those trolling a crawler harness or spoons beyond Tawas Point in 50 to 80 caught a fair number of walleye and lake trout. Pier fishing is very slow with only rumors of walleye caught in the evening.

Fishing Tip: Glow lures popular with Great Lakes salmon
Salmon fishing on the Great Lakes is really hitting its stride as many species are getting ready to begin their upstream migration. At the moment Lake Michigan is particularly popular for Chinook salmon with anglers trying various techniques to land this prized sportfish.

One tactic that can be particularly useful when targeting Chinooks is fishing with glow lures. This species can often be caught near the surface in low-light conditions and glow lures make that opportunity even more appealing.

Are you interested in targeting Chinook salmon this later summer/early fall? Check out their page on the Michigan Fish and How to Catch Them website.