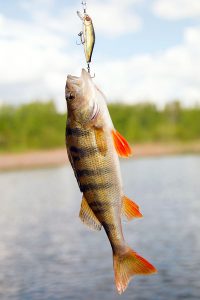 Saginaw Bay some perch were caught around sailboat buoys A, B, and H but the bite was slow. Fish were also caught in the old shipping channel just north of the Saginaw River mouth and a mile east of Spoils Island. Catfish anglers fishing in the Hot Pond have done well with crawlers, shrimp and chicken liver. Anglers out of Quanicassee were targeting perch but only a couple boats caught fish. They basically stayed put in one place and let the fish come to them. Those moving around never located fish. Fish were found in 8 to 14 feet and deeper. Perch anglers were out in Wildfowl Bay between North Island and the tip of Sand Point but no reports came in. A few walleye anglers were still out but catch rates were spotty.

Au Gres Area perch fishing off the Saganing and Pinconning Bars slowed some. A couple walleye were taken from the edge of the weed beds in 10 feet or more along the Bars.

Outer Saginaw Bay:
Oscoda, good numbers of lake trout were taken from the bottom in 130 to 170 feet. Atlantic salmon were caught in the top 30 feet. Try spoons, meat rigs, and flies out from the Au Sable River. Chinook are being marked near the mouth of the Au Sable River and a few were caught in 20 to 35 feet with spoons and J-plugs. Pier anglers caught fish on spoons. Walleye and smallmouth bass were taken by those casting crank baits or still-fishing with crawlers. Channel cats were hitting on crawlers on the bottom at night.

Tawas Area boat and pier anglers targeting perch were doing a lot of sorting to get a few keepers. Same for the boat anglers off Jerry’s Marina. Boat anglers fishing near the rocks around Alabaster took a few walleye when casting or jigging. Those trolling about 10 miles south of the Tawas River mouth found a few walleye in 35 to 45 feet.

Fishing Tip: What you need to know about fishing early autumn walleye

Targeting walleye in the fall can offer some of the best fishing of the season. Here are a few things to keep in mind if you target this sportfish in the near future.

To learn more about fishing for walleye in Michigan, including bait/tackle techniques and locations to try out, check out their page on the Michigan Fish & How to Catch Them website.