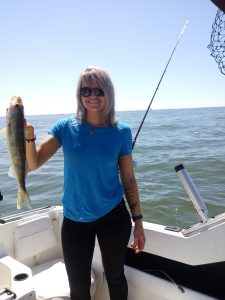 Saginaw Bay walleye were caught off Bay City and the state park in nine to 10 feet, east of the old Dumping Grounds in 15 to 17 feet and at the Spark Plug in 20 to 22 feet with crawlers. Fish were found two miles east of Buoy #4 with crawlers and spoons. The Slot from Sunset Bay Marina at Unionville up to North Island continues to produce walleye in 16 to 18 feet and outside the Bar in 20 to 22 feet. Those heading deeper and fishing 27 to 30 feet out near the shipping channel caught fish. A couple walleye were found along the edge of the weed beds off Sebewaing and in Wildfowl Bay in seven to nine feet. Also try 30 to 40 feet off the Charity Islands, Oak Beach and Oak Point with a crawler harness, body baits or spoons. A variety of other fish including pike, channel cats, white bass, freshwater drum and yellow perch have also been caught.

Au Gres Area limit catches of walleye were taken north of the Charity Islands to south of Eagle Bay Marina in 25 to 35 feet or more. Most were using a crawler harness, but fish were also taken on spoons and crank baits. Perch, catfish and freshwater drum were caught. Pier anglers caught rock bass and catfish on crawlers.

Oscoda lake trout continue to be caught in 80 to 160 feet with spoons and spin-glo’s with attractors. Larger fish were found deeper and most were on the bottom. A couple steelhead were taken on spoons in the top 50 feet of waters 100 to 140 feet deep. Pier anglers caught channel cats, freshwater drum, smallmouth bass, rock bass and a couple walleye with crawlers and leeches.

Tawas Area reported good catches of walleye, steelhead, brown trout, lake trout and a couple Atlantic salmon in 40 to 70 feet off Tawas Point with spoons and body baits. Walleye were caught in 25 to 40 feet with a crawler harness. The mayfly hatch is ongoing on most warm nights.

Sometimes we want to go fishing and enjoy getting out on the water, but just don’t want to expend a lot of energy – especially if it’s too hot to work hard at it. Here’s a laidback way to cover water and find fish you might otherwise miss, without needing complicated gear or a fancy boat. All you need is basic fishing tackle and watercraft. Even a rented rowboat, paddle boat or canoe can work.

Rig your rod with light line (four to eight-pound test), tie a small hook on the end of the line (#4 or smaller), and add a split shot or two about a foot above the hook. Favorite baits for this method include half a nightcrawler or a baby crawler, leeches or even some of the heavily scented artificial leeches or small plastic worms. Hook the bait in the center of one end so it doesn’t spin when you gently pull it through the water.

Position your boat so the prevailing breeze will carry it along a drop-off or across any area with water depths of at least 12 to 20 feet. Let out enough line, or adjust the amount of weight on the line, so your bait will stay about 12 to 20-foot-deep no matter how deep the water is. Then set your rod down against the side of the boat, relax and watch the tip of the rod for a bite. Drop the rod tip when you see a bite and count to three before reeling in and setting the hook with a firm pull. Not too hard!

Many fish such as bass, walleye, yellow perch, crappie and larger bluegill will move into deeper water and suspend at their preferred cooler temperature during the hot summer months. Slowly drifting a larger, natural bait at these deeper depths will often get you more than you bargained for.