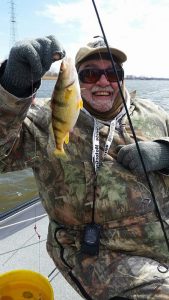 Saginaw Bay duck hunters are out in force, which was evident at area boat launches. Yellow perch fishing was slow. With the wind, the best spots to fish were a mile east of Spoils Island in 16 feet and the old shipping channel. A few fish were caught straight out from Quanicassee in 10 feet, but the numbers were not impressive. Very few perch were caught in the Quanicassee River, as a half-day’s fishing only produced five to eight keepers. Shore fishing from Sebewaing to Caseville was slow.

Au Gres Area a few perch were caught out near the shipping channel in 40 to 50 feet, between the Rifle Bar and the Pine River, and in front of Eagle Bay Marina in 5 to 15 feet with minnows.

Outer Saginaw Bay
Oscoda the occasional walleye and steelhead were caught by those trolling inside 60 feet. Pier anglers caught walleye, steelhead, lake trout and the occasional Atlantic or coho when casting spoons and body baits or floating and still-fishing minnows.

Fall is a great time to target smallmouth bass with Great Lakes pier fishing, a tactic underutilized by many anglers. As the lakes and rivers cool, minnows will congregate around the piers. Large, educated river smallmouth migrating downstream in the fall often will drop their guard when gorging on minnows at the river mouth, allowing some very nice fish to be taken on minnows that otherwise would be very slow to bite.

Find more information and tips on the smallmouth bass page on our website.