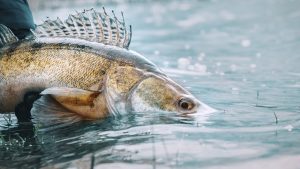 Saginaw Bay strong winds from the north and northeast make it difficult for boat anglers to get out. A few walleyes were caught in eight to 20 feet off Linwood and near the Callahan Reef in 15 feet with crank baits or a crawler harness. Fish were also caught straight out from Quanicassee in eight to 10 feet or at the south end of the Slot. A few yellow perch were caught when trolling crawlers. From Sebewaing to Caseville, most of the activity was shore anglers or bass anglers. Bass were caught and released on a variety of artificial baits. A couple pike were also caught.