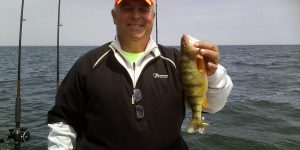 Saginaw Bay perch fishing continues to be slow for those using perch rigs with minnows along the Saganing and Pinconning Bars in 12 to 18 feet. A few fish were caught near Sailboat Buoys A, B, G. H and F, Spoils Island and near the mouth of the Saginaw River. Walleye were scattered along the inner bay, but a few were caught on the Callahan Reef when trolling in 12 to 15 feet and along the Slot in 25 to 26 feet. A couple fish were caught between Quanicassee and Fish Point. Most reported lots of weeds floating around the inner bay which made fishing more difficult. Shore anglers caught a couple small panfish in the cuts and at the boat launches.

Au Gres Area fishing slowed, but anglers found a couple walleye in 25 to 35 feet with crawlers and body baits. A couple fish were found straight out from Eagle Bay Marina with the same in 15 to 20 feet.

Oscoda those targeting trout and salmon found a few Atlantics, coho, lake trout and walleye when trolling spoons and meat rigs in 80 to 120 feet or 150 to 180 feet. Walleye and coho were in the upper half of the water column while Atlantics and lake trout were caught high and low. Pier anglers caught smallmouth bass, rock bass, freshwater drum and a couple channel cats on crawlers.

Port Austin walleye were caught in 35 to 65 feet when trolling crawlers and bottom bouncers. Lake trout and the odd steelhead were taken on spoons in 80 to 90 feet. A couple smallmouth were taken by those casting artificial baits inside and around the harbor walls.

Tawas Area walleye, brown trout, steelhead and Chinook were caught out past Buoy #2 and down near Alabaster in 35 to 60 feet with spoons and body baits. A couple walleye were caught inside the bay off Jerry’s Marina and near Buoy’s 4 & 6 in 20 to 25 feet with a crawler harness. Large schools of small perch were stealing the crawlers. A couple pike were caught off the pier.

When it’s very warm out think about where pike will hide – places with cooler water. These spots include along the thermocline, where coldwater streams/rivers flow into lakes, or around springs.

Look for water bodies that aren’t densely populated with pike so those present may have a chance to grow fairly large. Also consider locations that have special regulations (size limits).

Lastly, focus on water bodies that have a good pike forage base – particularly other species that prefer cooler water.

Want to learn even more about fishing for northern pike? Check out this page on the DNR’s website.