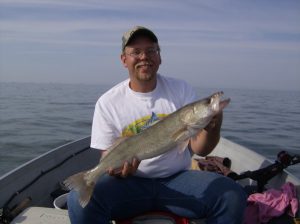 Saginaw Bay producing walleye. Fish were caught trolling crawlers and spoons at Sailboat Buoy’s A-F, trolling crawlers in 23 feet at the Spark Plug, 27 feet at Buoy #4, and in 10 feet off Finn Road. Those trolling crankbaits in 17 to 20 feet caught fish three miles north of Spoils Island. A few yellow perch were also caught. Walleye were caught from Quanicassee all the way up to the Charity Islands and Oak Point. Fish were taken in 12 to 14 feet off Quanicassee, throughout the Slot off Sebewaing and up to North Island in 16 to 18 feet. Those working the edge of the Bar also caught walleye. Most were taken on a crawler harness however spoons and body baits were also producing. Pike, channel cats, white bass and freshwater drum were caught.

Au Gres Area limit catches of walleye were taken in 25 to 35 feet with a crawler harness, spoons or body baits. Pike, perch, catfish and freshwater drum were also caught. Limits of walleye were caught near the mouth of the Pine River in 15 to 30 feet with a flicker shad or hot-n-tot.

Outer Saginaw Bay:
Oscoda lake trout were caught by trolling spoons and spin-glo’s with attractors in 70 to 120 feet around the shelf and from the river mouth north to Greenbush. Fish were also found as deep as 190 feet. Most were caught near the bottom, but a few were suspended. The occasional steelhead was caught on spoons in the top 30 feet while Chinook were taken on divers 50 to 60 feet down in 100 to 150 feet. Pier anglers caught smallmouth bass, freshwater drum, channel cats and rock bass when still fishing or drifting crawlers and leeches. Walleye were caught in the evening when casting deep diving crank baits.

Au Sable River – The dredging below US-23 has been completed. Walleye, channel cats, freshwater drum, smallmouth bass and rock bass were caught with crawlers and leeches in the holes below Foote Dam. Walleye were also caught by those trolling a crawler harness or body bait. Hex hatches are beginning and areas between Mio and Five Channels have begun experiencing hatches as well as (spinners) adult mayflies. In the evening, large brown trout will key in on Hex dun and Hex spinner dry flies on the surface.

Port Austin walleye anglers picked up a few trolling crank baits a couple miles west of the harbor and around the lighthouse. Pier anglers caught smallmouth bass, bowfin and bullhead with minnows and crawlers.

Tawas Area lake trout, steelhead and walleye were caught on spoons in 60 to 70 feet out past Tawas Point. Walleye anglers fishing down towards the Charity Islands in 25 to 35 feet reported a few limit catches with crawlers or body baits. A few walleye, along with the incidental small perch, were caught inside the bay near Buoys 4 & 6. Shore anglers at the boating access site caught smallmouth bass and rock bass when casting. Pier fishing was slow.

Tawas River anglers still-fishing or casting body baits and other lures for smallmouth bass and catfish but catch rates were slow.

Fishing Tip: How to know if you’ve found an invasive species

An invasive species is one that is not native and whose introduction causes harm, or is likely to cause harm to Michigan’s economy, environment or human health.

Once there you can search for species of plants, insects, diseases, mollusks, fish, mammals, birds or crustaceans and learn about Watch List versus Non-Watch List species. You can also learn how to identify invasive species and how to report it if you think you’ve found one.