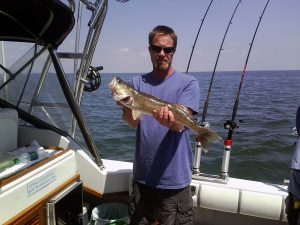 Saginaw Bay walleye were caught 3 miles off Linwood in 18 to 21 feet with crawlers and crankbaits. Those using crawlers caught fish 2 miles east of Spoils Island in 21 feet and at the old Dumping Grounds in 22 feet. A few anglers targeting perch were drifting in and around 28 feet just east of the Spark Plug but had little success. Walleye were caught all along the Slot from Sunset Marina to North Island in 18 to 20 feet. Those fishing the center of the bay out near the Coryeon Reef found walleye in 22 to 24 feet and east of the buoys in 26 to 28 feet. Off Bay Port, some had eight to 12 per boat, with the better fishing outside the islands in 18 to 20 feet with a crawler harness or flick shad. The fish were suspended about halfway down. Off Caseville, walleyes were found off the end of Sand Point and off Oak Point.

Au Gres a few limit catches of walleye were taken in 35 to 60 feet north of Point Lookout, east toward the shipping channel and south of Pt. Au Gres. A few perch were caught by those trolling for walleye.

Outer Saginaw Bay
Grindstone City a few walleyes were caught straight out as well as both north and south of the port in 25 to 35 feet with a crawler harness and artificial baits. Smallmouth bass and sunfish were caught on crawlers and body baits inside the harbor.

Oscoda had good fishing for lake trout, pink salmon, steelhead and the odd Atlantic or coho salmon. The steelhead bite was consistent, with a few up to 30 inches taken in 80 to 130 feet or as deep as 180 feet. The fish are scattered throughout and were hitting spoons, spin-glo’s and flies. Green, orange, pink and blue were good colors. A couple walleye were taken on spoons up higher in 50 to 120 feet. Pier anglers caught smallmouth bass, freshwater drum and channel cats on crawlers or crankbaits.

Port Austin anglers targeting walleye around the lighthouse and to the west in 20 to 30 feet caught a few with crawlers and crankbaits. Lake trout were caught by those trolling Yankee Reef in 115 to 135 feet with spoons in the bottom half of the water column. Those fishing around the thumb caught freshwater drum.

Tawas Area had good fishing, even with a mayfly hatch. Lake trout, brown trout, steelhead, Atlantic salmon and a good number of walleye were caught in 50 to 80 feet on spoons, flicker shad or crawlers.