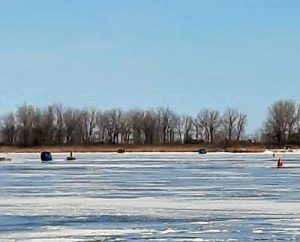 Saginaw Bay: The bay has ice; however, It is not safe to travel offshore, and taking machines out is not recommended as anglers and machines have gone through the ice. Those perch fishing near shore report various ice thickness where new ice has formed. Much of the bay has ice piled very high from strong winds. Those heading out should take a spud to test the ice ahead of you. Perch were targeted north of Linwood up to the Pine River in 2 to 4 feet. The trick is to move around and avoid crowds where noise will spook the fish. No walleye catches anywhere on the bay, as ice thickness was not safe to travel any distance. Fishing on the east side was slow at Vanderbilt Park. There were pockets of open water in front of Sunset Marina. At Finn Road, anglers were still catching small perch at the boat launch. Watch for areas of open water between Sebewaing and Bay Port. Fishing was slow, with only a few small perch caught. Wildfowl Bay was hit or miss on perch, and most were small.

Au Gres Area anglers caught lake trout and pike when using tip-ups with golden shiners or suckers. The lake trout were full of gizzard shad. Near Standish, anglers were fishing north of the Pine River in 6 to 12 feet with minnows on jack hooks. Some limit catches were reported. A good number of anglers were seen inside Eagle Bay Marina taking pike on tip-ups. Small bluegill, perch and crappie were caught on jigs.

Tawas Area fishing was slow at the access road near Jerry’s Marina, with only a few keepers taken along with undersize fish in 10 to 15 feet using jigs tipped with minnow heads. A lot of small perch and a few keepers were also caught. There is some newly formed ice beyond the older shelf ice, but no one is driving out there yet.

Now may be the time to learn some tips and tricks for targeting northern pike through the ice: