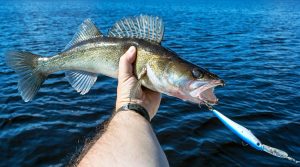 Au Gres Area #walleyefishing was fair as anglers were spending a lot of time locating active fish. Boat anglers were heading north toward the Charity Islands and south to Eagle Bay with crawlers, crankbaits and spoons in 35 to 45 feet. Fish were also found straight out from the river mouth and north towards the bell buoy. A few incidental perch were also caught.

Outer Saginaw Bay
Grindstone City a couple walleye were caught straight out in 25 to 35 feet with a crawler harness or artificial. Lake trout were caught northwest of the harbor in 120 to 130 feet with downriggers and spoons. Smallmouth bass were caught near shore by those in kayaks casting artificial baits.

Oscoda anglers caught lake trout, steelhead, pink salmon, walleye, coho and the occasional Atlantic or whitefish. Most were trolling spoons and spin-glo’s with or without attractors in 80 to 180 feet between Three Mile Park and Au Sable Point. Spoons were most effective. Lake trout were scattered throughout the water column and most of the silver fish were 20 to 70 feet down. Walleye were slow, some were found shallower and others were taken by those trolling crankbaits or harnesses. Pier anglers caught freshwater drum, rock bass and smallmouth bass when still fishing, floating or drifting crawlers. The odd walleye was caught on crankbaits in the evening.

Port Austin #walleyefishing was good around the lighthouse and to the west in 25 to 45 feet with artificial lures and boards. The occasional steelhead was also caught.

Tawas Area had good walleye action off Tawas Point and south towards Alabaster with crawlers, crankbaits and spoons in 50 to 70 feet plus.