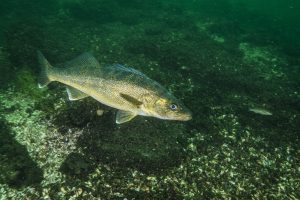 Saginaw Bay walleye were still being caught at the Pinconning Bar and in 17 to 23 feet in the Black Hole, the Spark Plug, and Sailboat Buoys A-B. A few fish were caught in 10 feet off Quanicassee and along the Callahan Reef. Those fishing the Slot between Sebewaing and Sunset Marina found fish in 16 to 19 feet with a crawler harness, spoon or body baits. The fish were scattered and found shallower or deeper as well. Fishing off Caseville was slow.

Au Gres Area trollers took some limits of walleye in 35 to 45 feet straight out from the river, north of the Charity Islands and well south of Point Au Gres with crawlers, body baits and flicker shad. Good walleye catches from north of the Rifle River down to the Pinconning Bar in eight to 15 feet. Some good size perch were also caught.

Outer Saginaw Bay:
Oscoda those trolling spoons, spin-glo’s, dodgers and cowbells caught lake trout in 50 to 80 feet. Most fish were taken near the bottom, but a few were suspended and taken on lead core or dipsey divers. The odd Atlantic salmon was caught on spoons. Pier anglers still-fishing, drifting crawlers and leeches or casting body baits caught walleye early or late. Channel cats, white suckers, rock bass and freshwater drum were taken on crawlers or leeches.

Tawas Area only few boats had been out. A couple walleye were caught south of the port down near the Singing Bridge. Pier anglers casting body baits caught smallmouth bass, pike and the odd walleye.

We bring you this oldie, but goodie fishing tip from 2014. Courtesy of Neal Godby, a DNR fisheries biologist out of Gaylord.

Although much of what a trout feeds on throughout the year is under the water’s surface, June is prime time for dry-fly fishing for stream trout.

Many aquatic insects, like mayflies, stoneflies, and caddisflies found in trout streams emerge during June making it an exciting time to fish with “dry” flies (those that float on the surface of the water). Check with your local tackle shop or fly shop to see what might be hatching in your area.

Many of the mayfly hatches occur after sunset, so be sure to be familiar with the river you are fishing, make sure your headlamp/flashlight is working, and have fun!