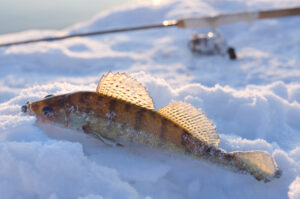 Inner Saginaw Bay:
In lower Saginaw Bay, anglers were catching walleye at Thomas Road in 18 to 27 feet of water. Walleye were also caught in the slot and past slot all the way to Buoy 1. At Finn Road, walleye were caught in 16 to 20 feet of water. Some yellow perch were caught at Vanderbilt Park in 3 to 4 feet of water. Jack hooks with red beads were working the best. On the east side of the bay, fishing from Sebwaing to Bayport was slow with a few pike speared. Those fishing for yellow perch only got a few. Wildfowl Bay had a lot of small perch with some keepers mixed in. A few lake trout were caught at the pier in Caseville.

Saginaw River; Upstream into Bay City had been slow but a few walleye were caught near the Appledore sailing ship in 22 feet of water, Independence Bridge in 20 feet of water, and across the channel on the far side from the DNR launch at the mouth of the Saginaw River in 15 feet of water. Anglers were moving to find fish in these areas. Good baits were a fire tiger jig head or jigging Rapala tipped with a minnow. Blue and chrome jigging Rapala tipped with a minnow also performed well.

Au Gres Area some perch and walleye were caught in the river and on the south side of the break wall. Jigs and spoons tipped with minnows seemed to work best. There were a few reports of some pike speared as well.

Pt Au Gres Area there were reports of some walleye and lake trout caught out past Pt. Au Gres in 15 to 24 feet of water off jigs and spoons tipped with minnows.

Outer Saginaw Bay:
Tawas Area perch and walleye fishing had been slow. Anglers were seeing or marking fish in 12 to 22 feet of water, but they were not biting. Anglers in the harbor were seeing pike, walleye and lake trout in 10 to 15 feet of water, but not catching many. Jigs and spoons tipped with minnows seemed to work best.

Trout fishing through the ice can be quite fun, if you use the proper techniques. Consider the following: