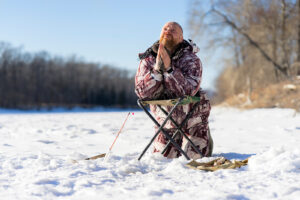 Inner Saginaw Bay, anglers were fishing out of Thomas Road, 3 to12 miles, for walleye in 19 to 28 feet of water. Anglers were also going out from Finn Road, 6 to 8 miles, fishing in 15 to 20 feet of water. Some walleye and yellow perch were caught at Callahan Road and Finn Road. Fishing from Sebewaing to Bayport was slow overall with some perch caught. Anglers doing well were staying active and moving around looking for perch. A few pike were caught. Wildfowl Bay had a lot of small perch caught with some larger perch mixed in. The bite had been tough for a lot of larger perch. Some northern pike were caught around weed beds.

Outer Saginaw Bay
Tawas Area perch fishing was slow with only a few smaller fish caught in 10 to 22 feet of water off minnows or waxworms. Walleye fishing was fair, mostly in the evenings in 17 to 22 feet off jigs or spoons tipped with minnows.

Tip-ups are a perfect technique to use for the entire ice fishing season in Michigan. This method allows anglers to sit back and relax, yet still experience the thrill of the catch!

Early in the season stick by shallow structures where species like northern pike and walleye will congregate. Try a variety of depths to figure out where they’re targeting exactly. However, if you are walleye fishing, the minnow should be hung 12 to 15 inches off the bottom. For pike the minnow should be hung three to seven feet off the bottom or just above the top of any vertical aquatic plants. The minnows should be hung in these positions for walleye and pike regardless of the over water depth.

Tip-ups become even more productive later in the season as less-aggressive fish are drawn to your presentation.

All anglers 17 years of age and older are required to have a fishing license.
Buy your license ►Today