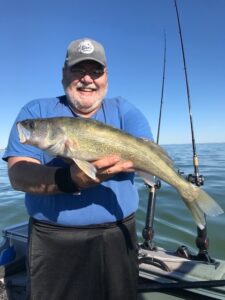 Saginaw Bay Walleye were caught out near Buoys 1 & 2 in 30 feet; near the Sailboat Buoys A & B with crawlers and 1 to 2 miles east of the Spark Plug in 22 to 24 feet when trolling crawlers and crankbaits. On the east side, fishing was inconsistent with most boats getting less than 6 walleyes. Fish were caught in the Slot between Sunset Marina and Sebewaing in 16 to 18 feet however anglers had to cover a lot of water to get them. Most were using a crawler harness right near the bottom. Bass were caught from Sebewaing to Wildfowl Bay when using artificial baits. Largemouth were caught in Wildfowl Bay. A couple walleye were caught near the Sand Point water tower when trolling a crawler harness.

Au Gres Area Walleye fishing improved with the warmer weather. Most anglers were getting a few in 30 to 40 feet out near the Charity Islands, between Pt. Lookout and Pt. Au Gres, and south towards the weather buoy when using crawlers and crankbaits.

Outer Saginaw Bay:
Grindstone City Smallmouth bass were caught by boat anglers casting along the shoreline in 3 to 4 feet.

Harbor Beach Lake trout were caught straight out and to the north when using dodgers with spin-glow’s near the bottom or spoons throughout the water column. Salmon and trout were scattered in 120 to 160 feet near the color lines. Walleye were caught when trolling in 40 to 60 feet north of the harbor. Try small body baits and spoons. Good colors were perch, blue, orange and black. Bass were caught in close to shore when casting small perch colored or silver body baits. Rock bass were caught from the break wall with crawlers.

Oscoda catch rates were slow but anglers were getting lake trout and the occasional steelhead when trolling spoons in 70 to 100 feet. Pier anglers caught bass when casting stick baits and body baits. The occasional Atlantic salmon was also caught when casting spoons or floating minnows under a bobber.

Tawas Area a few limits of lake trout along with a couple Atlantic salmon and steelhead were caught out past Buoy #2 when trolling spoons in 70 to 80 feet. Walleye fishing was slow with most anglers going out of Au Gres. Pier anglers caught a few pike, smallmouth bass and rock bass when using crawlers and body baits.

Fishing Tip: How to catch your own nightcrawlers – Pray for rain

Are you interested in catching and keeping your own nightcrawlers? It’s fairly easy to do – just follow these simple steps: