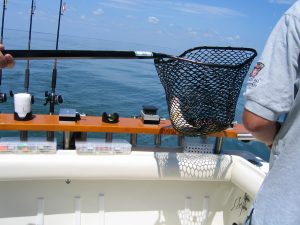 Saginaw Bay Area walleye were caught off Pinconning and Gambill’s Landing in 20 to 25 feet, off Linwood in 18 feet and east of the Spark Plug in 24 feet. Bass were caught at the end of Linwood Road. At Finn Road, those trolling crawlers caught walleye and a few pike in 7 to 10 feet. Walleye were caught straight out from Quanicassee in 9 feet and along the Slot in 19 to 20 feet with a crawler harness or body baits. Fishing was hit or miss at times, but limits were caught by those covering lots of water to find active fish. Good action was noted in the Slot between Sunset Bay Marina and North Island in 18 to 20 feet as well as along the Bar in 22 to 24 feet. A crawler harness in a variety of colors is still being used by most. Fish were also taken on Hot-n-Tots, flicker shad or spoons.

Outer Saginaw Bay
Oscoda lake trout, steelhead, coho, Atlantic and pink salmon were caught when trolling spoons in 70 to 100 feet or out at the “Humps” in 150 to 180 feet. Hot colors were green, orange, copper, red and purple. Lake trout were taken on dodgers with spin-glo’s. Pier anglers caught channel cats, smallmouth bass and freshwater drum on crawlers and minnows.

Tawas Area had good walleye, steelhead and Atlantic salmon fishing between Tawas Point and Alabaster in 50 to 70 feet with crawlers, body baits and spoons.

Fishing Tip: How to know if you’ve found an invasive species

An invasive species is one that is not native and whose introduction causes harm, or is likely to cause harm, to Michigan’s economy, environment or human health.

Once there, you can search for species of plants, insects, diseases, mollusks, fish, mammals, birds or crustaceans and learn about Watch List versus non-Watch List species. You can also learn how to identify invasive species and how to report it if you think you’ve found one.